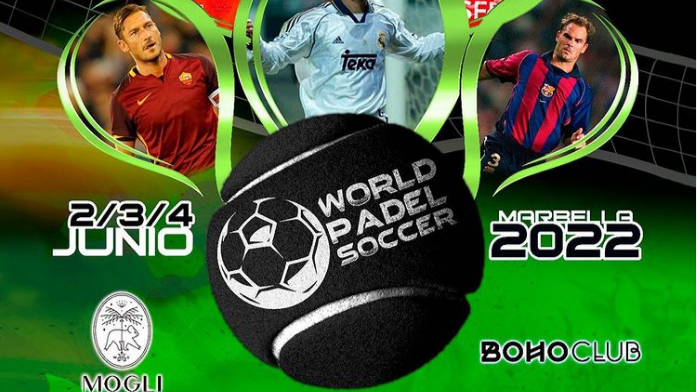 If you are in Marbella for the next few days and you are a football aficionado, you may well come across some former football glories in the city.

Indeed from 02 to 04 June will be held the first edition of the World Padel result in the mythical club of Los Granados. This event will bring together former footballers, all of whom have become fans of the pala for an exceptional tournament which will oppose 12 pairs.

This original idea comes from the player Jose Bernal (198th in the WPT ranking). Indeed, the native of Marbella wanted to honor the former stars of the football fields. Beautiful names are now confirmed. This is how we will find on the 20×10 the former Barça player Frank de boer, But also Kepa Blanco, ex-star striker of Sevilla FC with whom he won a UEFA Cup, a Super Cup and a King's Cup.

All eyes will certainly be on the legendary AS Roma striker, Francesco Totti. We already told you about it some time ago the former player of the Squadra Azzura is a big fan of padel. We find him regularly in the 20×10 with his former playing partners.

his compatriot Christian Panucci, former azzuri international will also be part of the party and will play the role of tournament ambassador.

For a few years now, footballers have been big fans of padel. More and more former players are even going so far as to swap their crampons for the pala.

It is only natural that this first edition of the World Padel Soccer will be highly anticipated by fans as they will want to see how their former idols fare with a racquet in hand. On the side of footballers, the desire is very present because this event will allow them to find the taste for competition while keeping a fun side and without pressure. The idea is of course to come and have fun and it is mainly for this reason that the padel hits the bull's eye among former high-level athletes.

Madam Mayor Angeles Munoz spoke about this great initiative and confided to the microphone of the journalists present during the press conference that “organize a tournament padel in a city where the world of football is very present is a very good thing in terms of tourism. This is why the organizers can count on our support.".

"This tournament will be made up of 24 players (12 pairs) who will compete in the qualifying phases on Friday 03 June. Two groups will then emerge, one which will have access to the final table and the other which will fight in a so-called playoff group. . The final will be played on Saturday 04 June in the afternoon ” confided Eusebio Gomez director of the host club of the competition.