Padel Magazine - The world's top padel players prepare to make their debut in the first international competition of the era World Padel Tour. The best players of the circuit are already on the land of Lusas. The expectation is great on the side of the fans. Tickets have sold like hot cakes and the stands on the central track at the Lisboa Racket Center seem too small to accommodate everyone.

Since 10h00, a succession of matches have taken place. They will only stop when we have all the players, qualified included for the main draw.

More than a tournament, it's a big party since we have been able to attend demonstration matches with Agustín Gómez and Federico Silingo Quiles, part of the world's top 9, and two of the best Portuguese players: Miguel Oliveira Diogo and Taveira.

If outside the tournament, the padel is at the party, the preliminary rounds gave rise to the big show.

This Wednesday, the matches of the knockout stage have started. On the central, Roberto Saba and William Demjanjuk Vs Raul Diaz-Javier Limones opened the ball.
Tomorrow is the return of all our champions. We will keep you informed in the news until the end of the week. Stay connected on our site! 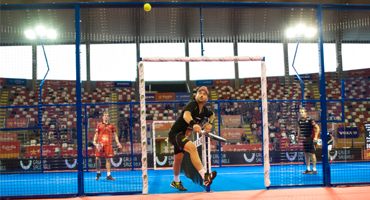