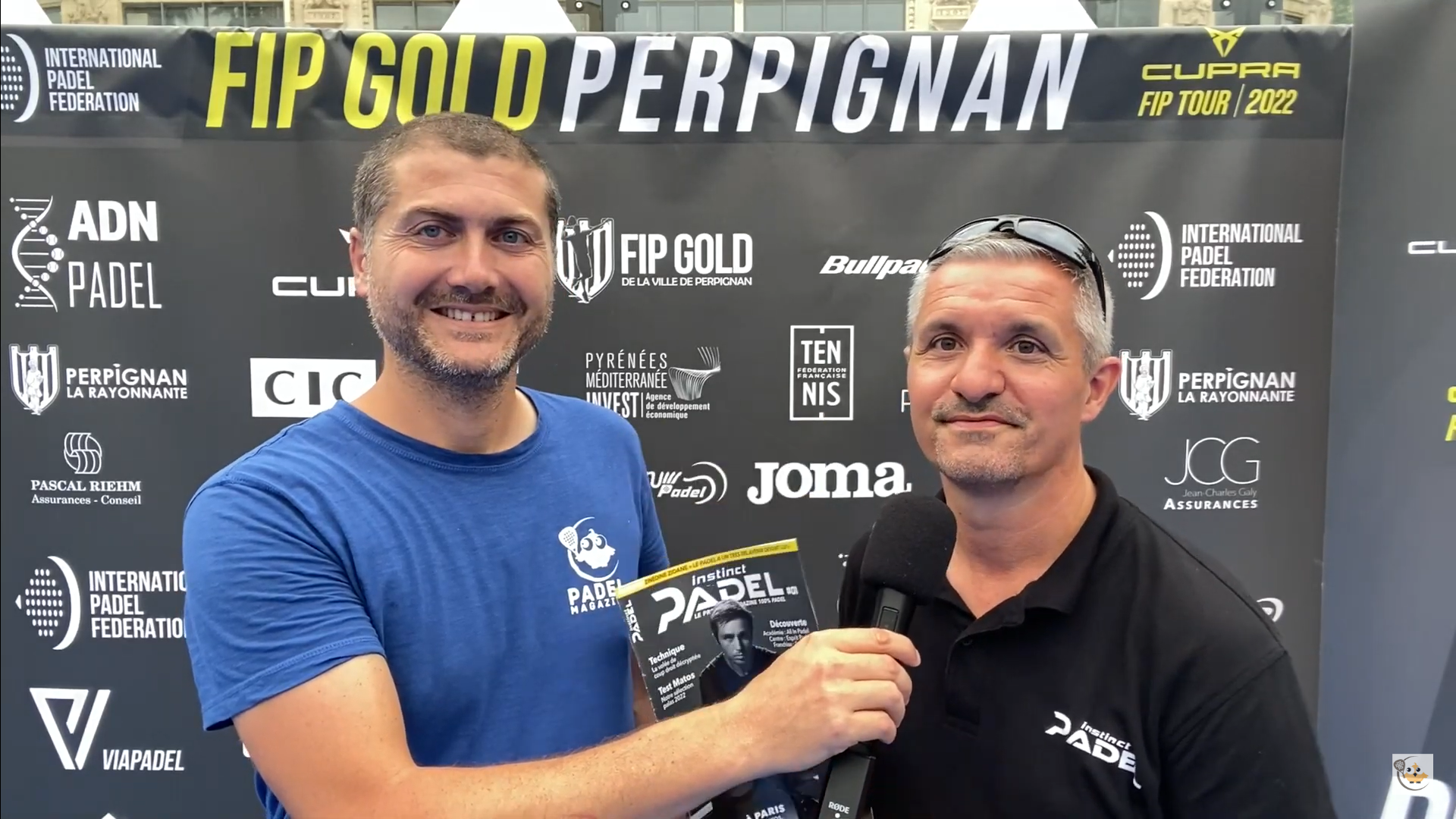 Present at the final of the FIP Gold Perpignan, Yann Guilcher spoke at the microphone of Padel Mag to tell us a bit more about “Instinct Padel” a magazine 100% padel which he launched in association with other collaborators.

“Congratulations to the public for having answered present!”

Padel Magazine : Could we expect such an atmosphere during this FIP Gold and especially for the final?

Yann Guilcher : “The public responded present, it was almost full. However, it was very, very hot. Congratulations to the players because they still held out for more than 2 hours in this heat wave.

So congratulations to them and to the public for being present to "encourage" this great tournament! »

Padel Magazine : In addition to the fact that this FIP gold Perpignan is a new adventure as it is a first edition, it is also a great first for you since the first magazine 100% padel called "Instinct Padel " just got out !

Yann : “It's the first in France! There were some in other countries like Italy or Sweden…but again, in France it's the first. It is already available in the bins and a little everywhere in the centers of padel with which we are in partnership, and also in airports, train stations, tobacconists and press kiosks. You can find them everywhere in France! »

Padel Magazine : We saw that the magazine was available in international airports like Orly!

Yann Guilcher : “We have to, the players travel a lot…so airports and train stations are imperative for us. »

QR Codes in order to “have more interactivity”

Padel Magazine : Can you give us the ambition behind this project? The format, the number of magazines that there will be every year?

Yann : "It's a bimonthly. We started with 20.000 magazines on the first, because we didn't really know what to expect, but that's not bad for a paper magazine.

We who already have Instinct Foot and Instinct Rugby, we know it's not bad for the padel.

We started with a bimonthly subscription and a little bit everywhere in the centers. It is a format of 48 glossy pages, with a lot of sections: foreign players, French players, franchises, contests, rackets, pure technique, especially at the level of volleys in this first issue..

We wait impatiently the second issue which will be at the beginning of September if I'm not mistaken, with a lot of slightly different things.

This magazine stands out a bit: you will often find QR codes, which once scanned, will redirect you to videos. And all this in order to have more interactivity on the magazine. »

Padel Magazine : Is this system based on QR Codes also what makes this magazine original and charming?

Yann : “So we obviously didn't invent anything since the QR Code is present almost everywhere, but it's true that there are few of them in magazines. Whether for sponsors like NGTV, Betclic or Babolat, we have this QR Code which allows you to see videos redirecting to ads etc. We did the same for the technique, or for a lot of other things in the different sections. »

Padel Magazine : I am a player, I like the padel and I would like to have this magazine, how are things going in terms of subscriptions?

Yann : “Two things: you will be able to have it in the magazine with a basic check like we did in the old days. But we also have a little more interactivity: you have a QR Code, you scan it and fill in the necessary information and afterwards you will receive your magazine at home every two or three months.

But you can also find it in the different centers: 4Padel, All In Padel, a lot of independent clubs in Perpignan and Bordeaux. You will be able to have them, buy them or find them in certain tournaments where they will be distributed. »

Objective: “To have people who appreciate the magazine” above all

Padel Magazine : What can we wish you?

Yann : “Beyond subscribers, even if it's still the sinews of war, I would say more people who appreciate the magazine.

I was pleasantly surprised, I saw a lot of people who talked to me and told me that there were a lot of interesting things […], all that brings us a lot!

Obviously without subscribers and partners we won't be here long, we all agree, but I think we all like it padel and that there are still interesting things.