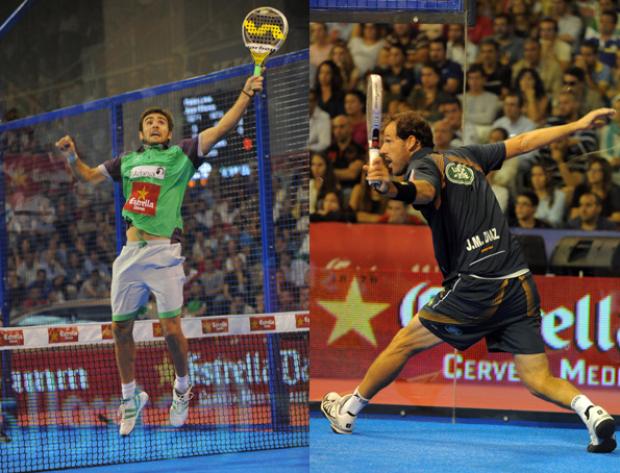 Padel Magazine - The two best world pairs are again in the final of a major tournament. The WPT of Granada will not have departed from the rule. This duel that becomes almost a weekly appointment delighted the viewers and reminds us to a lesser degree perhaps the duel between Nadal and Djokovic in tennis.

This is the 9th time this season that Juan Martín-Fernando Belasteguín and Juani Mieres-Pablo Lima cross the iron in the final. Advantage to the 1 numbers worldwide but the Hispanic-Brazilian couple is not yet very far.

The first game of the day was rather disappointing. Not that the quality of the game was mediocre, but the princes were too far ahead to be worried by Paquito Navarro and Jordi Muñoz. 6 / 1 6 / 2 was the result of this match. Pablo and Juani were extremely effective because the games were well and truly tight and do not reflect this game.

The second match was much more interesting since we almost saw a defeat for the kings of Spain. Miguel Lamperti and Maxi Grabiel took the world 1 numbers by winning the first 6 / 4 set. But here they are not at the top of the rankings for nothing and Bela who was rather in there until then took things in hand. The two sets spun at the speed of light. Miguel Lamperti and Maxi Grabiel once again bow to the world 1 numbers, preventing them from reaching a final of a WPT they have not tasted for a long time.

Everything is ready for a final between the two best pairs in the world. The games are ready.