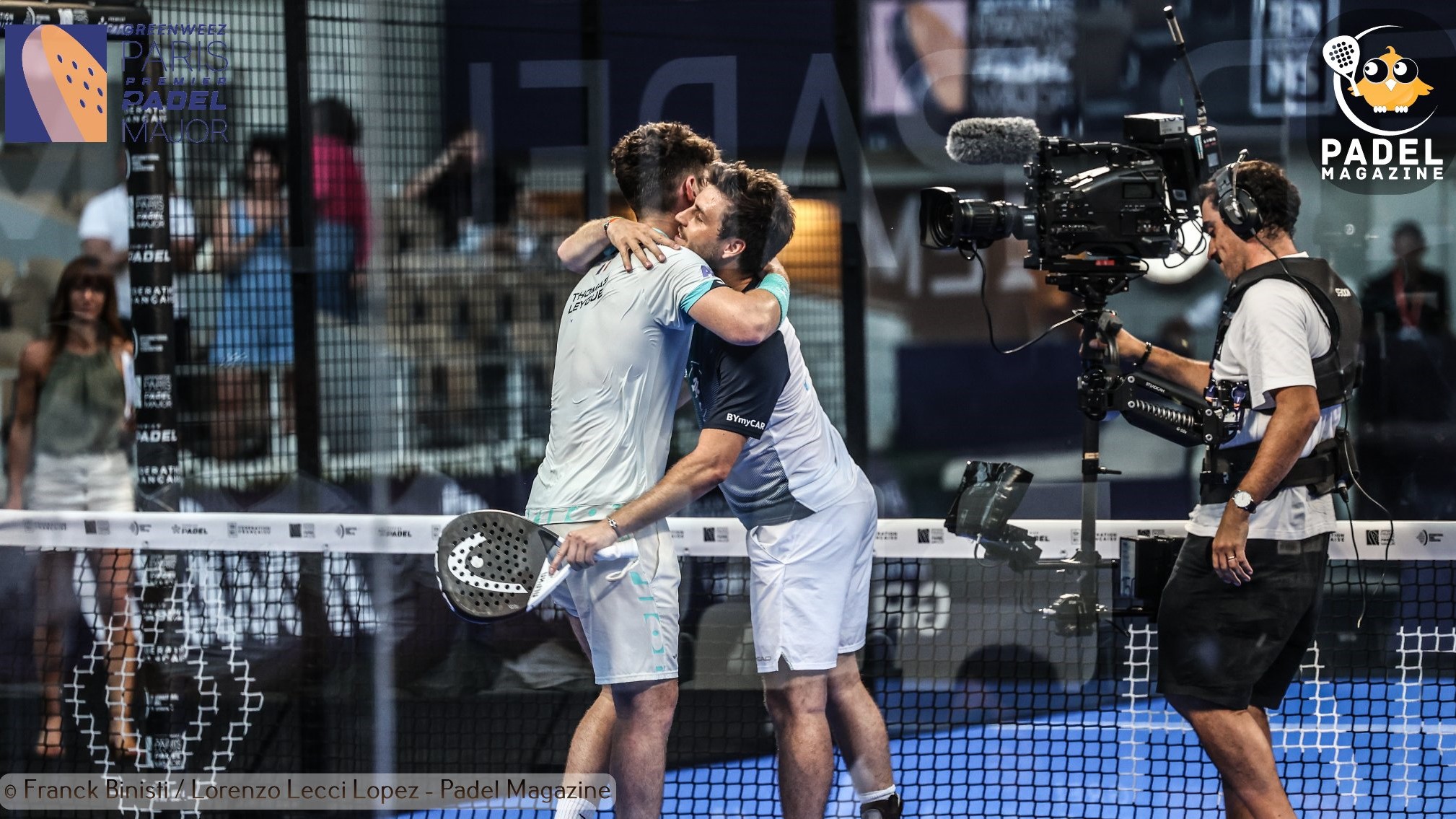 The Leygue/Bergeron pair went to the microphone of Padel Magazine around 23 p.m. last night, to come back to his victory and talk about THE challenge that awaits him in the round of XNUMX of the Greenweez Paris Premier Padel Major.

” A match that was played out in small details “

Johan : “It was really a rather exceptional moment to play on this central, which means a lot for us French. I think we fought a good battle all four. We come out 7-6 7-6, it was hot. There were mini-recoveries, breaks and unbreaks, but we will remember the positive which is to have won this match. »

Padel Magazine : What was the negative point of the match?

Thomas : “We had a lot of opportunities, we still dominated for a bit of the whole match. It was mainly us who had the breaks, etc., and where it's negative is that we didn't know how to close and confirm our breaks. This is something that needs to be improved.

After we were solid, they had a big game too. We come out 7-6 7-6, but it could very well have worked in their favor. It's a match that was played out in small details! »

“In the important moments, we were very good”

Padel Magazine : What are the lessons to be learned from this match?

Johan : “Inevitably it is a victory that is significant. It doesn't matter who it is in front, it doesn't matter the score. We play in a mythical place for us, whatever happens is remarkable.

When you play on the Philippe-Chatrier no matter how you win, you're happy in the end.

Afterwards, I think that what we have to draw from this is that, as Thomas said, we had a little tougher times. We were in front all the time, even when they came back, we didn't lower our heads. And in the end when you win 7-6 7-6, that little extra thing is still on your side.

We made two very very good tie-breaks, so the lesson is: whatever happens, in the important moments we were very good. »

Padel Magazine : Jeremy Scatena explained that Jérôme Inzerillo and Max Moreau were in the thick of it, do you have the feeling that it's a pair that today is better than before?

Thomas “Always has been and always will be a very good pair. They are playing very well right now. And in my opinion what Jeremy was saying is that they are confident at the moment, they are winning good matches, they are having good results and the difference with Jo is that we had little moments low, slightly more difficult results.

After in terms of level of play, the four of us are more or less at the same level, I think he bet on them on the basis of confidence and I fully understand. »

Padel Magazine : Next match, do you know who you are playing against?

Johan “We even knew the schedule before playing this game. Seeded number 4, Tello/Chingotto. They have nothing more to prove in the world of padel. We will play in “night session”.

At one point we were talking about a significant victory, but we can also stay on significant matches and that will be part of it.

It's up to us to give everything to make the most of it, to hold the first service games, because if there are 3-3 I think we can have fun. If you don't believe it, you take 6-0 in a quarter of an hour, you do nothing and you don't even like it. »

Padel Magazine : It reminds me of the Coello / Bela match in which we had the impression that you had perhaps a little (too) respected them. Will this match serve as an experience for you not to approach the poster against Chingotto / Tello in the same way?

Thomas : " It's certain ! Against Bela / Coello I also think that we respected them too much and we were directly walked on. We are going to try to change that. As Jo says, the most important thing will be to stay glued to the score.

In Toulouse we also had the advantage of the public, but we couldn't and knew how to take advantage of it. Again against Chingotto / Tello we will have the public with us, because against Max and Inze it was more 50-50.

We will try to take advantage of it even more, but above all try not to reproduce the mistakes made against Bela and Coello. We'll see what happens, but it's still a very complicated match. »

Johan : “The match against Coello/Bela is in the past, we didn't do the right thing and since then we've been playing much better: whether individually or as a team. We had a great victory precisely in Holland, a little in the hard but we won. There again a 7-6 7-6 victory, it is necessarily complicated and we won again. These are matches that we must keep in mind and that serve us as experience.

Maybe to tackle a big match like the one against Chingotto / Tello, it will be necessary to use it. »

To follow the match tonight against Chingotto/Tello, it's HERE !