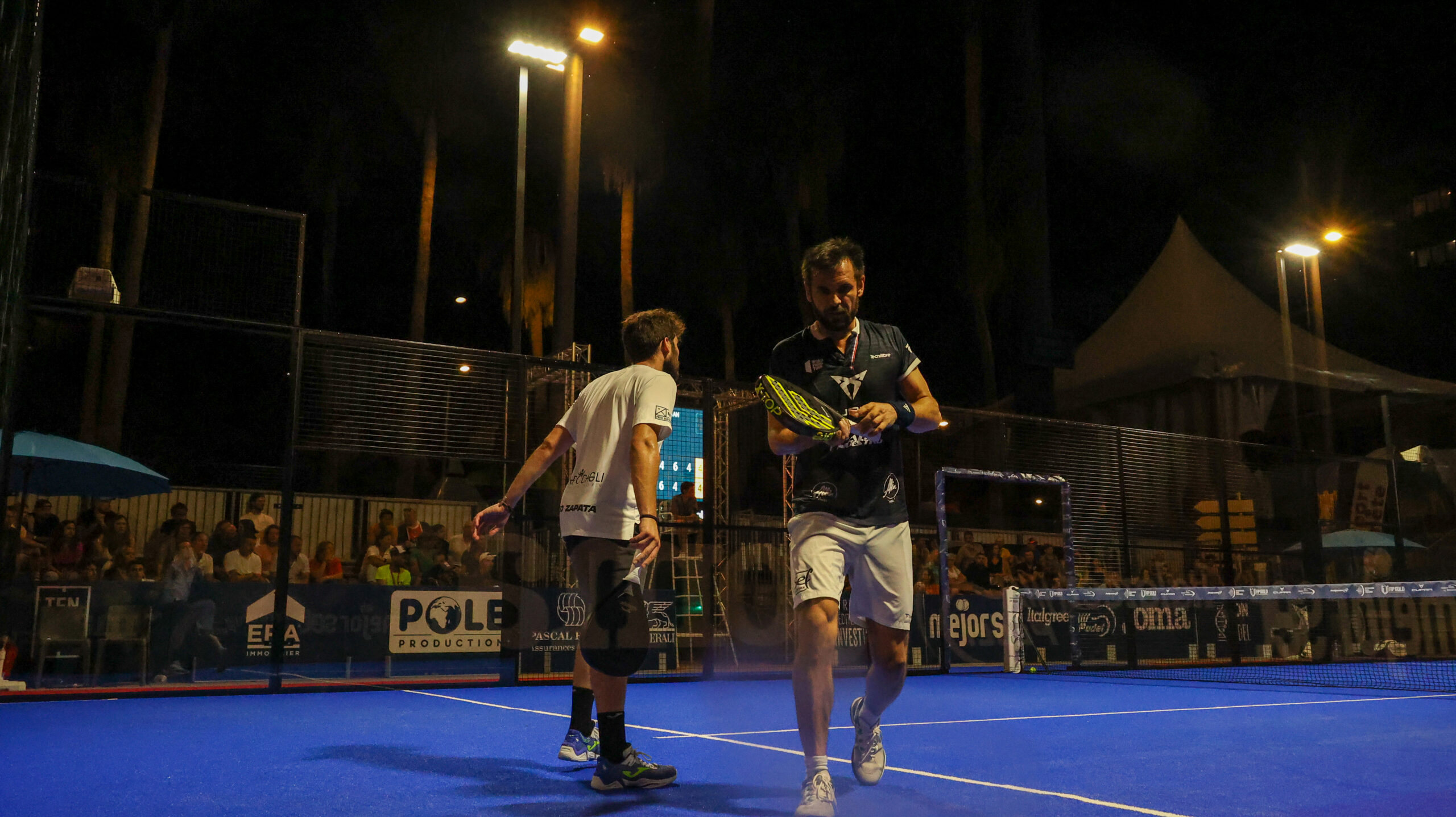 Teo Zapata and Benjamin Tison have the opportunity to enter a sixth major tournament table of the WPT. Follow the meeting of the Franco-Spanish pair against Alba/Sans live.

The first is saved. The second will be played on punto de oro. Ben asks for the return!

TWO MATCH BALLS! Ben and Teo get two match points on the return.

Two points from the game! 30a

The vast majority of balls go to Teo Zapata who assumes with his smash by winning the punto de oro. Put in the fridge, Ben plays his best these few balls. The Franco-Spanish pair will have, on the return, the possibility of concluding the set, as in the first…

As in the first set, Alba/Sans get back together at 4 everywhere without getting into trouble.

Teo Zapata and Ben Tison drive the point home and chain a 3rd consecutive game. Ben Tison is on cloud nine. The scenario of the second is very similar to that of the first…

New balls for the service of Benjamin Tison.

The attitude of Ben Tison and Teo Zapata is much better on the track. Today the two men encourage each other, and reproach each other for almost nothing. The chemistry is high, and when both players are connected, the pair is devastating. “Que bueno eres” (How good are you) Teo shouts to Ben when I write these lines to support my words.

Teo and Ben are angry. They light a few wicks and win the game in express.

This time, Alba and Sans are able to confirm their break. Unlike the first set, they fly to the score.

Point of gold! Ben and Teo get into trouble by conceding a break point. Ben Tison's smash does not go out by 4, and Alba counters it! Angry Ben Tison takes a warning!

Alba/Sans leaves no possibility in this service game.

The French and the Spaniard are aware that winning the first set was only the first step. They come back with the same intentions and intend to go all the way!

This season, Benjamin Tison has really taken on another dimension. He is one of the leading players in the previas because he is able to turn the matches in his favor. How lucky to have a French player at this level.

UNBELIEVABLE ! Benjamin Tison takes things in hand to conclude the set with a nice volley!

It will be a punto de oro! A misunderstanding between Ben and Teo costs them the point!

The first is saved by Alba/Sans. Two more possibilities.

In the ninth game of the first set, it was important to stay strong. With a little success with the band, Tison / Zapata offers the possibility of concluding the set on the return.

4/4 – Alba/Sans recovers in the right direction

Overwhelmed for a good 10 minutes, Sergio Alba and Anton Sans Riola won their service game without losing a single point, and rebalanced the debates.

Teo Zapata is now completely released. His smash is wreaking havoc! Ben accompanies it to perfection by demonstrating great solidity and concludes with a subtly deposited window exit. The psychological ascendancy is resumed with 8 of the last 9 points for Teo and Ben. 4/3

The break is validated by a blank game! What character of the pair.

Teo and Ben come back from the change of sides with even more intensity! They in turn get 4 break points!

The first is saved, but the second hits the mark! Station wagon for Alba/Sans. 3/2

Ben's service game is disastrous for the Franco-Spanish pair who concede 4 break points.

Ben's two-handed backhand stays in the net. The Spaniards once again save their face-off. 2/2

The first is well saved by Sergio Alba. Tison asks for the return on the punto de oro.

On a world-class rally, Benjamin Tison concludes with a par 3 to afford two break points.

Teo and Ben manage to win their second service game more easily and race in the lead. The two men came back well in their meeting. 2/1

In a new tight game, this time it is Tison and Zapata who get a break point. Sergio Alba and Anton Sans Riola save her after a long rally. 1/1

Ben Tison starts on serve and secures with two big smashes. On a missed window exit, the Frenchman gets in trouble by conceding a break point, but saves it with a splendid par 4. 1/0

If they want to make the feat of qualifying for a sixth main draw this season, Ben Tison and Teo Zapata will have to work against Alba / Sans. Indeed, the Spanish pair is the seeded n°2 of the previas, and is favorite for the match.

This morning, Teo and Ben made a strong impression by dominating Goenaga/Bautista 6/2 6/4. “It's been a long time since we've played like this! We had a great game“, confessed the French n°1 to Padel Magazine leaving the court.

Teodoro Zapata, Benjamin Tison, Sergio Alba and Anton Sans Riola step into the ring! In the gymnasium of the University of Valencia, the WPT has set up two beautiful ephemeral courts on which it will be possible to exit through the door.