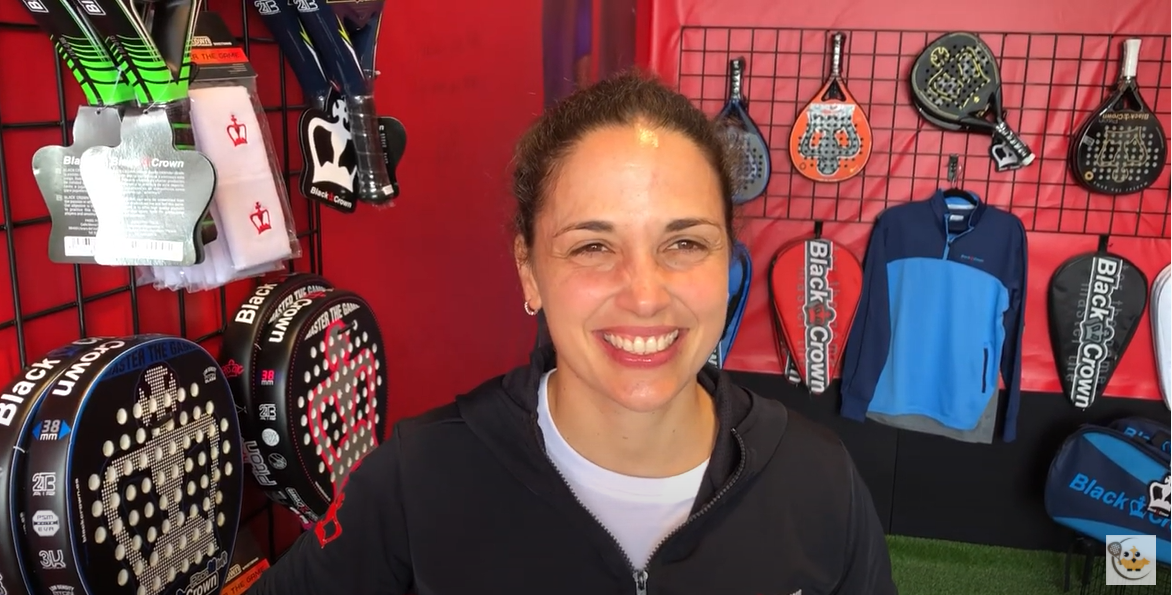 As the Round of 1 of this Blockchain.com WPT Miami Open are played this Thursday, Padel Magazine was lucky enough to be able to exchange time for a moment with Elisabeth Amatriain.

For those who don't know Eli is not new to the circuit of World Padel Tour.

Indeed, long associated with her longtime partner Patty Llaguno with whom she shared the world throne in 2013, it is now alongside Carolina Navarro that the young Spaniard has been evolving for more than a year now.

Ranked 17th in the world and member of the Team Black Crown, it was only natural that we met her on the stand of the brand in the village of the tournament.

She came back with the smile that characterizes her so well on her two victories in three sets in 1/16th and 1/8th. She also tells us about her feelings before the meeting which will oppose her tomorrow to the numbers 1 Alejandra Salazar and Gemma Triay.

Satisfied with the work done

During his meeting today against Nogueira and Guinart, the native of Logroño accidentally took a bullet in the eye.

More fear than harm, she reassures us by explaining that despite a slight pain everything is fine.

We begin the exchange by asking him about his feelings in Miami:

"I am satisfied with the work we have provided because it is often said that the first tournament of the year is difficult given the first sensations. Although we train a lot, when we compete, everything is different.
We knew that here in Miami we were going to be very hot compared to Madrid, where it is very cold at this time.

We have to adapt to all situations and in general it is the pair that can do this best who manages to win most often.

I'm very happy too because we suffered but with a positive attitude and by not giving up we can change the situation during a match."

This Friday in the 1/4 final the pair Amatrian – Navarro will face the numbers 1, Salazar - Triay.

She confided in her feelings about this big match in perspective.

"They are the best right now and we like to face them. Of course it is better for players in 1/4 than at the start of the competition, but what is certain is that we will give everything and be as competitive as possible..

We will have in front of us a pair that is playing very well, with a lot of self-confidence, especially thanks to the second half of the season that they have played.

We will try to make it difficult for them and as I have told you, we will have to be competitive from the start of the meeting.

We are coming back from two matches in 3 sets, so we will have to challenge ourselves mentally”

The Black Piton 10 and Eli match

Impossible to say goodbye without mentioning his new pala.

We couldn't resist asking him his feelings about his new racquet, the black Pithon 10 from Black Crown.

Listening to the Spanish, she would have found the perfect pala for them.

“I'm very happy with it, I love it. First of all for the design, I find it really very beautiful. Then when I was able to test it, I found it excellent, I feel the ball well, I feel that I manage to control it well while maintaining this bit of power which helps me enormously given my less aggressive game. than the other players.

You will have understood that this Friday will be a decisive day for Eli and Carolina who will face the pair of the moment, the taulières of the WPT.
With two matches in 3 sets over the last two days and all that under a blazing sun, the number 17 and her partner will have to give everything to have a chance to create the surprise.

You can find this interview in Spanish thanks to the video below.