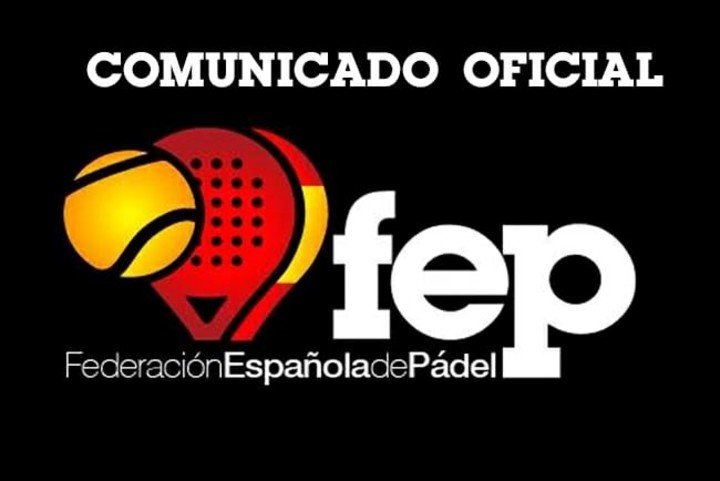 We told you about it a little while ago: Spanish Federation of padel (EFF) and the World Padel Tour reached an agreement to launch a new category of tournaments, the WPT Next.

However the Association of Professional Players of Padel (PPA), chaired by the world number 1 Alejandro Galan, does not appreciate this union between WPT and FEP and she wanted to make public her disagreement vis-à-vis this project through a press release.

The Spanish Federation of padel responds to PPP

The response of the Spanish Federation of padel did not drag and the Iberian institution wanted to rectify some points:

1- First of all, we respect the opinion of this collective. However, we do not share the arguments set out in the press release published yesterday.

2- In order to clarify the inaccurate information issued by the PPA, we recall that in the context of the FEP, the agreement with the circuit of the World Padel Tour has not only been subscribed by the Federation itself, but has also been signed by 15 of the 18 territorial federations.

3- This agreement between the FEP and the 15 territories with the World Padel Tour frames the desire for freedom that the PPA proclaims so that professional players can choose the circuits in which they want to participate. This new proposal aims to improve and develop the offer in terms of competition and thus offer more options under the aegis of the FEP and the 15 territorial federations. In addition, this will be done in an egalitarian manner, so that the rewards distributed are the same for the Gentlemen and for the Ladies. Athletes can thus participate or not in a tournament freely but claiming to prevent that there are more competitions available is not consistent with the message “padel free” that they have been defending for some time.

4- Concerning the assertions coming from the PPA on the need for the FIP to validate the decisions of the FEP, it is appropriate once again to make some corrections to these remarks. The FEP is integrated within the FIP. Nevertheless, the institution, like the territorial federations, is an independent and autonomous organization, which can enter into agreements which it deems beneficial for the padel in Spain. Let us also remember that the padel federated goes much further than the professional sector. It brings together clubs, amateur and professional athletes, veterans and referees.

5- On April 12, the representatives of the association met with the leaders of the FEP as well as the various territorial federations. This meeting took place five months after the establishment of the said association. So far no contact had been made with the FEP, and no official presentation of the collective was made.

6- The meeting with the PPA was a first contact between the association, the FEP and the territorial institutions with a view to reaching an agreement with the World Padel Tour to promote a new category of competitions. Of course the grievances of the players were heard but this is not the only factor that could be taken into account when making a decision.

7- Within the FEP we do not understand PPA's calls for a consensus, given that the association has at no time informed the Spanish Federation, even if only for information, of its negotiations with the International Federation of padel and QSI to develop a new circuit which, it should be remembered, will be managed by a private company recently created.

8- Due to the dispute between the organizing company of the professional circuit and a group of players, from the point of view of the FEP we understand that the relations between the parties have deteriorated. It is up to the institution in question to put an end to the problem and find a viable solution. However the World Padel Tour has already organized a whole series of tournaments in Spanish territory for this season in which players contractually linked to the circuit will have to participate.

9- From the FEP it is with great astonishment that we note the affirmation that appeared in the press release from the PPA on the fact that "it is even more incomprehensible that the FEP asks federations from other countries to unite to this initiative, without the validation of the International Federation of padel, of which the FEP is itself a member”. No contact has been made with an international federation in order to reach an agreement with the World Padel Tour. It should also be remembered that the FEP has no obligation to have the agreements, negotiations or other decisions taken validated by the FIP.

Finally, we invite the PPA and its President Alejandro galan to put in place a strategy based on dialogue and cooperation. Regarding the Federation's field of action, we will continue to bet on the training and development of young hopefuls in Spain as well as on our desire to improve the offer in terms of services and competitions for athletes of all categories, clubs and referees.