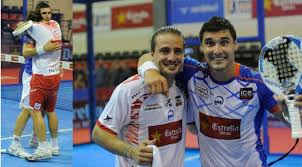 Padel Magazine - The "bombarderos" (robbers) made an extraordinary match to overcome the Princes namely Juani Mieres and Pablo Lima.

In this first round of World Padel Tour de la Nucia, Agustín Gómez Silingo and Federico Quiles were the stars of the knockout stage with a dying tie-break.

To access the 2e tour, it took extraordinary points and a "hot" audience to push the possible surprise to reality.

Fede and Augustine experienced a third set almost impossible to describe. Only the lucky ones who have experienced this match live can attest to the extraordinary spectacle offered by these two pairs. Silingo and Quiles had indeed countless opportunities to settle the account to their rivals but only managed to do it in the tiebreak of the decisive set that could be summed up to the endless embrace of these magnificent winners .