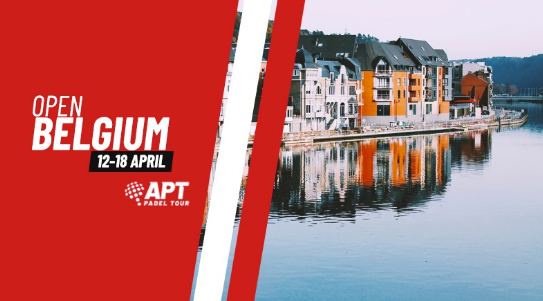 Discover the draw for the Belgium Open of the APT Padel Tour which will take place from April 12 to 18 in Liège.

The health situation complicates everything

First of all, remember that the APT Padel Tour had to adapt because of the health crisis. So there will ultimately only beonly one tournament in Belgium, and this one will have 18 pairs so no qualifying phase. All the pairs that were to arrive from South America had to forfeit due to the complexities of travel during this pandemic period.

The women's tournament which was to take place the following week must also be canceled. After the cancellations of Chile and Monaco, the APT can congratulate itself on managing all the same to adapt, by offering a tournament with an interesting level, in a superb setting, and with an enticing prize-money!

18 teams and a maintained prize-money

The tournament will start Wednesday April 14 by the round of 18, the round of XNUMX will take place on Thursday, the quarterfinals on Friday, the semi-finals on Saturday and finally the final on Sunday, April XNUMX. It will be played entirely at the Fonck barracks Liege. Despite the reduced table, the APT maintained the prize-money of € 35!

Only two pairs currently have points on the APT Padel Tower, they are therefore respectively seed numbers 1 and 2. The TS1 is none other than the young spanish pair Montalban / Simon, while TS2 is the Franco-Spanish pair: Scatena / Bernils !

It will of course be necessary to be wary of the best Belgian duos that are Crasson / Peeters et Braet / Gala, but also from one of the best French pairs, reformed for the occasion: Tison / Maigret. Also watch out for the Dutch Maarsen / Meijer or to the Hispano-Portuguese pair: Rocafort / Oliveira ! The French Max Moreau and Jérôme Inzerillo will also not be there to make up! In short, we should attend some very nice meetings!