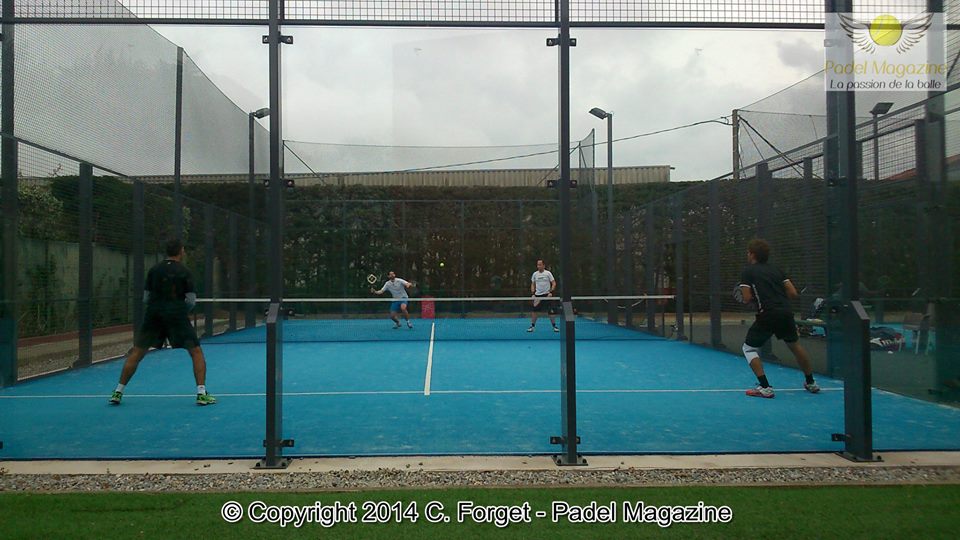 Padel Magazine - The weekend of March 29 and 30 took place the first stage of the season of the southern region of the National League of Padel at the Mas club in Perpignan.

32 players participated in the competition, 4 hens each consisting of 4 teams.

From the first games, the competition was going to be tough. From the first group match, the legendary Carcassonnais, François San Miguel and André Gaubert were already showing off, not with a bottle in hand, but padel racquets well honed.

They found themselves in trouble in the first game by losing the 1er set dryly. But we do not get rid of players from the club of Hers so easily. They will finally come out of this winning match. More than a match, it was a message addressed to all the other pairs of the tournament.

Very quickly the regulars of the tournaments find the reflexes, one remakes of course the matches around a coinche and a beer.

The logic on the grounds will still be respected.

The 2 favorites from each pool will qualify for the quarterfinals. Fred Tap and Alain Henry decide to play the quarters on Saturday for fear of the possible rain on Sunday.

So it's been 4 games in the day ... For some, we are starting to be in the red. Jean-Marc Dalain (From the Marseille Tennis Club Padel) will fight to stay in the nails. He will then be able to use the indefatigable Clément Forget to " send it to coal ". He will return crimson of his tournament.

Again, and despite this very sporty Saturday, the quarterfinals will offer a show. But the logic will be respected again. Bastien Blanqué and Laurent Imbert overcome the famous pair of the club Mas to know Fred Tap and Laurent Talairaich in 2 sets hung.

Alain Henry and Pascal Gniss will put an end to the adventure of Carcassonne while the tournament's No. 1 pair (Alexis Salles and Cédric Carité) will win their match against Loic Tap and Laurent Imbert.

The 4th quarter will remain in the memories of the 4 protagonists since the match started at 19pm and ended at… 22pm!

More than 3 hours of match, an 3e set of anthology that will last more than 1h30 ... This match will end with a tie-break and a magnificent victory of Jean Marc Dalain and Clement Forget (Padel Park Marseille) ... The cocktail of 21h had started without them, but the two pairs quickly caught up ...

The next day, one pair had disappeared while the other was present, but no more ... The Marseillaise team was cooked despite a sun to absent subscribers. Just to see the pictures that we offer on the facebook page.

Sunday morning, it is then time for the semi-finals and necessarily no one on time… Except Pascal Gniss already ready to do battle…. Unfortunately that will not be enough for the local pair, beaten by the licensees of the Hers club.

At the same time the pair of Paddle plus will walk in the semi-finals, to beat the “zombies”, namely the famous Marseille pair Clément and Jean-Marc, certainly still drunk (with joy but not only…).

In the final, Cédric Carité - Alexis Salles and Bastien Blanqué - Laurent Imbert will fight a big fight. All the shots of the padel Will pass, exit the field, smash through the door, cushioned "chewing gum", the spectators had for their eyes.

But it is finally Alexis and Cedric who will emerge victorious from this match, in 2 sets 6-4 7-5.

The pair of Mas made up of Carlos Arnau and Olivier Soler will win the consoling.

Note an organization and a welcome, once again idyllic. The Club de Mas shows once again that it has become an essential club in the padel French.