Julien Bondia recently explained to us how position yourself well back to the padel. Today we are going to see a more tactical aspect, thanks to the data compiled by Romain Taupin, Padelonomics.

An analysis on the World Padel Tour Women

Romain has deliberately chosen to focus on matches of the World Padel Tour female, which more closely resemble the padel played by amateurs. Indeed, the WPT begins to broadcast the matches from the quarterfinals, and you only have to see the smashes of Juan Lebron or Agustin Tapia to understand that these players, evolve at a different level.

This is the first thing that concerns us, out of these 239 services, there is a percentage of false returns of only 4,6%. Is a false return approximately every 22 services!

Certainly, one can think that these players are used to returning with the glass and therefore that they will experience fewer winning serves than amateurs. It's true, but you also have to realize that the quality of service is certainly better than what you can find among amateurs.

What should be remembered above all from this information is that the pros are instructed to especially not to miss their return. In padel, it is essential to return to the field, in order to set up an exchange. So no need to try to make winning returns, instead focus on making your returns successful, especially if you are particularly bothered by window services !

Majority zones for the left player 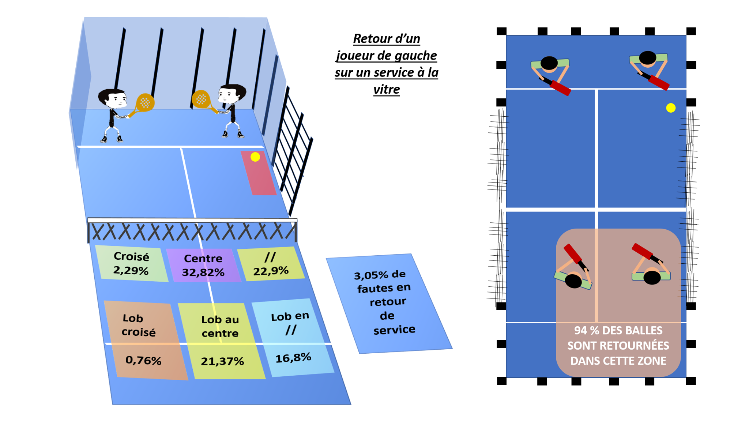 We realize that almost all returns are made in parallel and in the center, and that the players are placed in the Australian or in a classic way. The cross return is more risky, you really need an excellent hand to achieve a passing or a cross lob backhand on a return to padel, and given that we want to minimize the risks, it is a very little attempt.

Majority zones for the player on the right 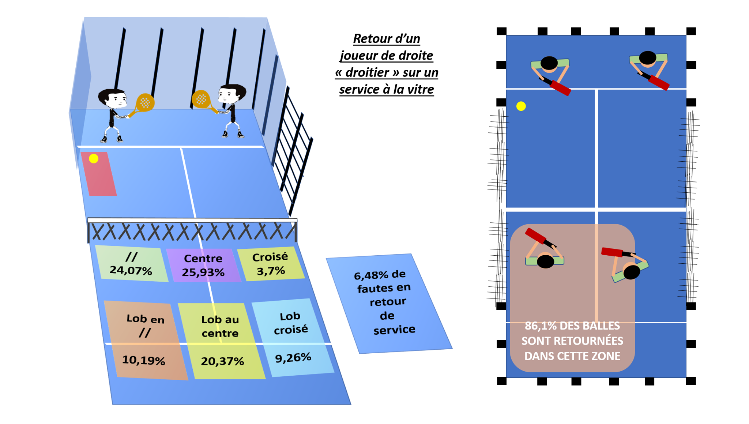 Un a little more cross returns for the player on the right, since it is normally easier to perform a forehand “short-cross”, but again a large majority of returns are made in parallel and in the center. It's always the same story: putting your back in the field!

Back in lob or from below?

We realize that the players have not afraid to return a serve to the glass in lob, since on the 239 analyzed returns, we are around 40% of returns are lobed. In general we can say that the return to lob must be achieved when you are in a favorable position.

Basically, when service is hard to get back, it's safer to return from the bottom. Indeed, it is better to give an easy volley to your opponents, than an easy smash which will almost always end in a winning point.

It's important to vary between strong returns to the body, plunging, and lob, in order to avoid the volleyball players always having the same balls to play.

On the volleyball side

We therefore understood, seeing the return trends of WPT players, that they were used to return to areas where the risk of committing a fault is the lowest. This is what the turners should seek to do.

On the volleyball side, if you face players who respect these principles, you will be able to predict where the ball is likely to land and position yourself accordingly. As Romain Taupin says : " Don't try to cover the whole ground, stick to the most probable." The important thing is to achieve a good first end or a good first smash-Bandeja-Vibora, in order to keep the advantage of the service and to put pressure on the defenders.

For more statistics and analyzes of this kind, do not hesitate to visit the site Padelonomics or Facebook Padelonomics.