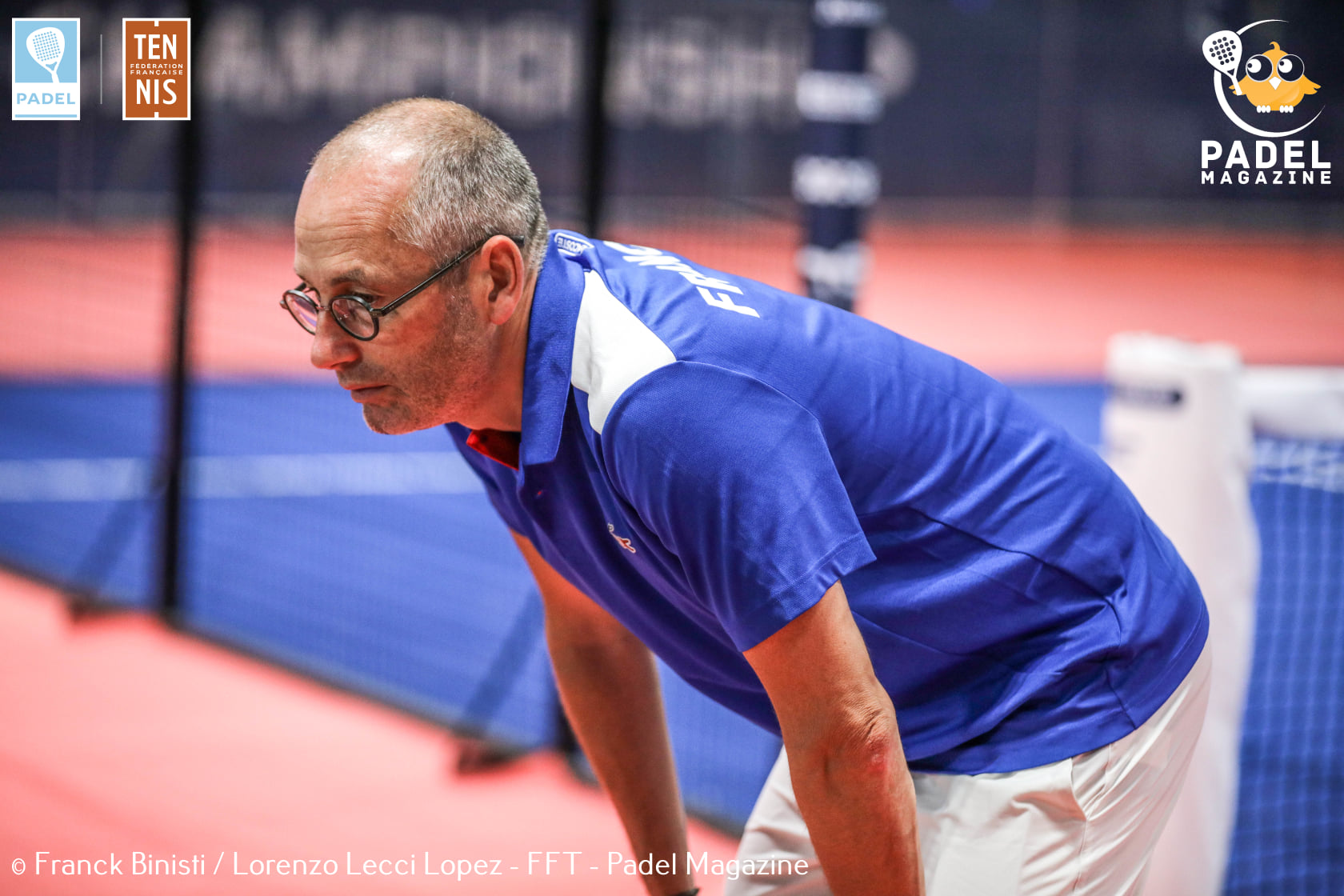 Padel Magazine speaks with Alexis Salles, who is now the former coach of the France national team padel male.

Padel Magazine : Alexis, how are you? What is your news padel ?

Alexis Salles: First of all, thank you for dedicating some time to me and I take this opportunity to congratulate Padel Magazine for his work and his omnipresence on all subjects padel !

To answer your question, I'm doing very well and I'm taking advantage of this period to take care of my back, which still hurts me a lot. I really hope to be able to find my way back to the pitch this summer, the games of padel I miss you so much!

For the moment I have no particular project in the padel but I remain very connected and I continue to follow the news diligently, in particular thanks to Padel Magazine !

During the Human Padel Open in June, under the leadership of Robin and in connection with the Occitanie league, I will help the organization for the coordination of volunteers. It's a magnificent project carried out by Robin (Haziza, editor's note) with a masterful hand, which will dazzle our pink city for ten days and I am very happy to be able to contribute to it.r.

A dazzling evolution in five years

Padel Magazine : Let's go back to this end of 2021, you decide not to continue with the gentlemen's team. What are the reasons ? A certain weariness?

Alexis Salles: I decided not to continue my adventure within the male selection mainly for a question of time. In 2021, which was certainly an exceptional year with two international competitions, I was away for more than 40 days. But the most absorbing part is the time devoted almost daily throughout the year to the players of the France group but also to those who aspire to it, to certain coaches – physical and mental trainers of players and of course the relations with the FFT and Robin.

The evolution in 5 years has been dazzling and I was reaching my limits to fully assume this role. As you know, I am also a partner in the accounting firm ASB CONSEIL with the responsibility of around twenty employees and incidentally I have a wife and… three adorable but very engaging children! (Laughter) This is why my position as captain of the EDF became difficult to reconcile with my professional and personal life.

In addition, I felt that it was the end of a cycle and that it could be great for the players to move on to another dynamic with a professional coach who could take the team even higher. I hope that Pablo Ayma will bring his skills and experience to help the team get on the podium!

Padel Magazine : Were the Europe in Marbella and the World Cup in Qatar the triggers?

The European Championships in Marbella were particularly difficult because we were in a post-Covid period that was difficult to manage emotionally. When we gathered at the MAS club in Perpignan, I hadn't seen the players for almost a year… On the other hand, many players lacked competition and some lacked confidence.

If we add a very disappointing organization of the competition and difficult playing conditions, this led to some very tough matches and the week was very stressful on the nerves. But the group hung on and we still managed to get the 3rd place in these championships, losing only against Spain.

The world championships in Doha were very different in the sense that it was the selection that was very difficult for me because I had complicated choices to make… It's the hardest part of the position of coach because you have to take into account multiple criteria: the level of the players, their investment, their state of mind and so on... There are a few players who are essential in the France team but the level is tightening and many are likely to join the group.

During each selection, I try to have the most harmonious team, in terms of level but also of state of mind. You also have to think about the different possible combinations during the competition, depending on the current form of the players. In short, it is not an easy equation to solve and a great responsibility. And the difficulty is that you have to make your own decisions. Of course, I had the support of the Federation in each of my choices during these five years but the fact remains that we are on the front line and it is sometimes heavy because only eight players are selected …

On the other hand, the championships in Doha were really successful thanks to an exceptional organization. The players were able to unite around a goal, were very professional and accepted my choice of changing the team composition. In the end, we achieved very good championships by reaching fourth place in these world championships. I sincerely thank them for their investment and the happiness they gave me for my last championships.

Padel Magazine : Are we going to find you somehow with functions in the padel ? The idea of ​​creating a club of padel has always been in the pipeline, especially with Laurent Imbert, where are you?

Alexis Salles: For the moment I am giving myself a little time… But I am still in contact with the actors of the padel and I hope that I will have the opportunity to participate in other adventures in the months or years to come!

It's true that this is a project that is close to our hearts with Laurent, but the difficulty is finding the right location at a consistent price... Besides, don't hesitate to contact us if you have any info. !

Laurent and I have been friends for 25 years, passionate about padel and both very attached to our city, Toulouse. So it would obviously be both a source of great pride and a real challenge to create a club of padel together… And then, hope gives life!

Padel Magazine : When we see the boom in padel that we know, what are the possible obstacles to its development?

Alexis Salles: It is true that the padel is experiencing incredible growth and nothing seems to stop its development. it is obvious that there will be a need for structures in the years to come. The possible obstacles are in my opinion at two levels :

Padel Magazine : What are your fondest memories of padel ?

Alexis Salles: My best memory remains our title of European champion in 2015. OK there was no Spain but the teams had a similar level and all the meetings were won in the decisive match. I was then a player – captain and the emotions were incredible !

Then I have a memorable memory of our quarter-final victory against Uruguay at the world championships in Paraguay in 2018. It was a completely crazy meeting that ended in the night with some crisp anecdotes.

I also have great memories of my captaincy with the youngsters during the world championships in Castellon. The young people were so amazed and motivated by the event, it gave a lot of freshness! Our support was very different from that of the adults, we had to check everything: their diet, their sleep, their warm-up and so on… The week was ultra physical but they gave us so much pleasure and emotion that it remains unforgettablethe !

Finally I have great memories of our returns in the truck with Laurent Imbert and often Bastien Blanqué after the stages of My Padel Round. These four years of developing our circuit have been exciting. They often pushed us to our limits and were so rewarding on a human level! I am very proud of what we have accomplished with very few resources and at a time when the padel did not yet have the fame that we know today...