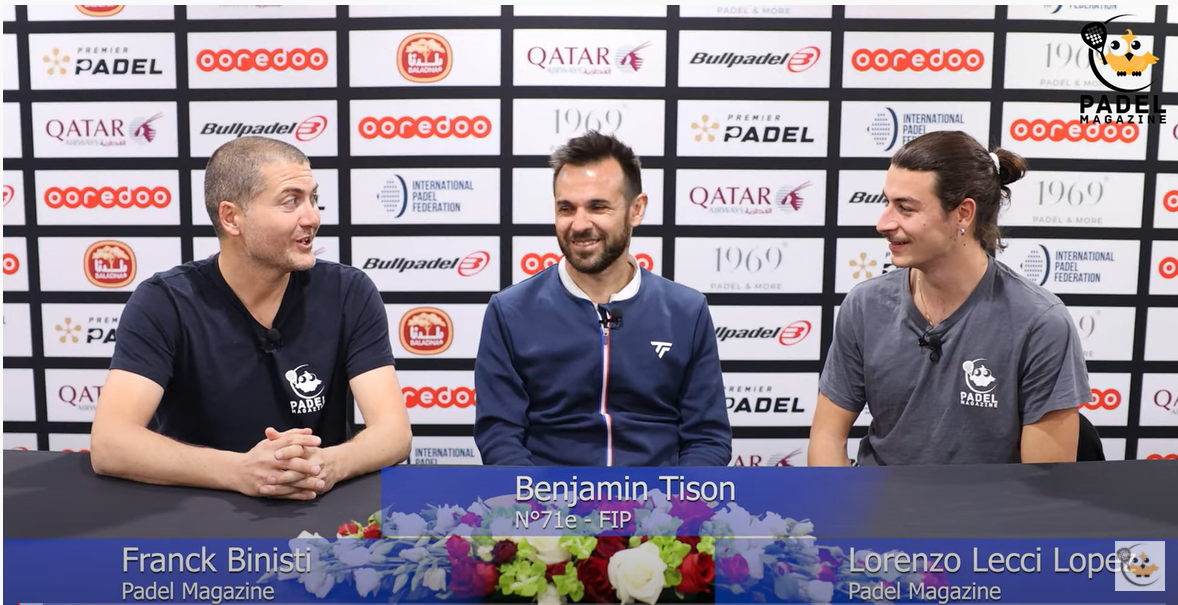 It was one of the moments of this Tuesday, Benjamin Tison et son partenaire Teo Zapata have managed to shake up the numbers 1 world during their confrontation at the Premier Padel Qatar Major.

Indeed, the Franco-Spanish pair took advantage of a very good start to the match to win the first set against Alejandro galan et Juan lebron.

At the microphone Padel Magazine, the French number 1 returned to his match and confides in his impressions on the spot.

At our microphone at the end of the match, the Francilien tells us how he lived this part and what was his feeling after having snatched the first set from the captains of the padel World.

“I'm very happy, it's a small achievement because they are the world number 1, they are very far from our level normally.

We took advantage of the fact that two days ago they were playing a final in Vigo in indoor conditions, and they arrived yesterday without having had the opportunity to train and played outdoors in the wind. We also add that with Teo we played well at the start of the match.

We had a blast on the pitch, we showed great values, we hung on like crazy and there was a great crowd in the stands. "

"It's rare that I'm happy when I lose (laughs). I always want to do better even when the chances are slim.

As you could say we made them doubt, and they respected uss.

I'm happy, and you always have to start by winning a set and then winning a match.. I find all the same that the 6/2 – 6/2 on the last two sets remains severe but it is the experience, these are small details. But I hope they will go to the end of this competition so that I can say that I lost against the winners” (laughs)

A booming start to the season

And it continues by taking the first set against the world numbers 1 in Doha!

“It's a year that has started incredibly well in terms of results despite ten complicated days at the start, but I managed to refocus.

Today I experienced something incredible. I play padel to live moments like this".

In view of the remarkable and remarkable performances of the champion of France, one wonders if he could soon aim for the Top 50 in the world.

Amused, he answers us with great humility.

"It's very hard to climb the rankings. Even by making two final tables, I keep my place of 68th.

The level is very homogeneous in previas and it is played on details. Of course I would like to be in the top 50".

Faced with the increasingly high level of padel worldwide, Ben Brand gives us his opinion on the future of the padel and the role that tennis can have for young players.

“Players like Galan et Lebron have hardly played tennis, there is a new school coming and I think that in 10 years the level will be even stronger.

There will be very good players in all the countries who will be in the padel without starting with tennis. Of course by working on certain things from tennis such as the volley etc.. we can have facilities.

For my part it is sure that I have great facilities thanks to tennis but my style of play adapts perfectly to the padel. "

Of course, this is the question that many aficionados ask themselves: is Premier Padel would have been a big blow to WPT ?

We interviewed the Frenchman and wanted to know his opinion on the matter.

“I understand the question and it is that for the first time we are filmed for qualifying matches. I can't explain to you why it wasn't done sooner because it's nonsense. I'm not here to argue. There must be a lot of things that I don't know about. Alas, politics is present everywhere, both in the padel like in everyday life.

so much better than Premier Padel do it for us, we are satisfied. Some say it's the first time they feel like players of padel professionals. It's the truth, today we're like tennis players, we're pampered and it's especially great for the future of the padel."

“Pushing in the same direction”

"In an ideal world I'd like to see the WPT and APT buy dates from QSI promoters and become one. I hope we will have the intelligence to do it and I believe it is not impossible.

I think it sucks that we shoot each other in the paws, it's a new sport that everyone loves which is exploding all over the world, we have to push in the same direction.

Today we have to play all the tournaments which is absolute nonsense but later the objective would be like in tennis, to be able to choose our competitions.

There will be tournaments for all levels which for me seems more coherent. I'm glad we have this association (PPA), we are all united and we are going to do great things"

Before concluding this interview Benjamin confided in the continuation of this new circuit. How the players were going to organize themselves to play the other 9 dates knowing that for the moment nothing has yet been published by the organizers.

“As you said we have a little more info than you but at the moment we can't say anything. But it's true that it's very complicated because although we will earn more money and experience great emotions, we know that next year we will suffer because there will be injuries.

The calendar will be more difficult to plan, plane tickets will be more expensive but I think we have to make this effort because a lot of resources are being implemented on the other side.

The French wanted to end this beautiful exchange by thanking the organizers of the tournament for the incredible work.

"Congratulations to the players and organizers of Premier Padel".

You can watch the full interview in the video below.