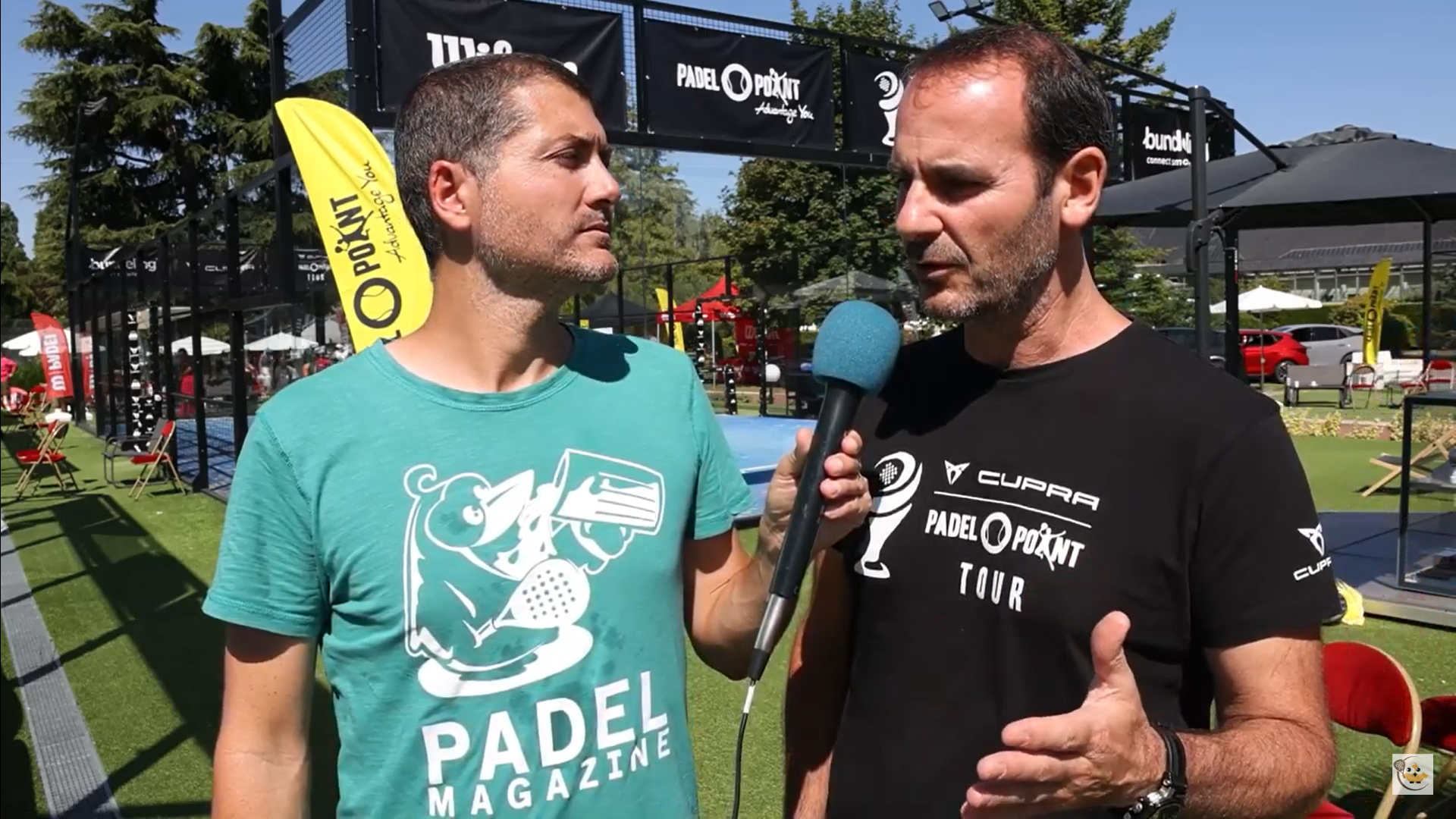 During the 7th stage of Cupra Padel-Point Tour, we had the opportunity to interview Franck Lemousse who is behind the organization of the circuit. We came back to the keys to the evolution of the circuit and its current events from a personal point of view.

The evolution of the Cupra Padel-Point Tour : improved clinics with pros and exhibition matches

Padel Magazine : Can you give us the changes that you and your team have made during this stage compared to the others?

Frank Lemousse : ” Over the years, we have developed the Cupra Padel-Point Tour to do the best "plugging" with the clubs. Each club has its size, its public, its rhythm of life and we try to optimize it. In 2023, it's really going to be a big challenge to make sure that it matches well with the clubs so that it's a success.

Here we know the club, it's nice, we did something rather well “branded”. But above all we have great entertainment, people come, they have a good time. We have superb places that are very nice, very cool and the notion of welcoming people well is the most important thing.

Padel Magazine : What are the main developments between the Cupra Padel-Point Tour of its beginnings, and the developments that you have and that you will bring to the next steps?

Franck : “We improve the clinics with the pros. We really make sure to increase the playing time with people who love to play with the pros. We have Mélissa Martin who really works a lot on finding players who like to get closer to the public who sometimes do not necessarily know the padel, so it's very interesting.

We also seek to have beautiful exhibitions, we also increase the copy to have pros who show what the padel very high level. And I hope on the very nice event Premier Padel that we will have next week in Paris, we will have very good matches.

We really try to improve this relationship with people, by bringing some pros on the field.

Padel Magazine : Little teaser for 2023, what direction are you going to take?

Objective of the circuit: to provide a professional environment for amateur players

Padel Magazine : We had the opportunity to discuss with Matias and Florian about Padel-Point. We mentioned the fact that recreational players can take advantage of top-of-the-range services, it's not just elite players. When you see all this you can expect to see the world number 1, while all this is for you.

Franck : “Absolutely and you are absolutely right. There are people that it impresses, and so the idea was to say: you are not a professional, but we will provide you with an environment as if you were. And I even heard sometimes that it was better than a pro event. We may not be exaggerating, but in any case the idea is to say to ourselves: I play my matches, there are people who film, there are small interviews, they take care of me and I am received. I think it's nice to be received in this way.”

Padel Magazine : Can you tell us about the next stage of the Cupra Padel-Point Tour and from a personal point of view, can you tell us what will happen regarding the news of the Player's Academy and the Pyramids club in the next few weeks, next months?

Frank Lemousse : ” Regarding the next editions of the Cupra Padel-Point Tour, we are going to Bandol. I think it can be nice. Then we'll go to Monaco, more precisely to Beausoleil, it's pretty nice too. We're going to let the month of August pass, it's the holidays.

We resume at the beginning of September, we will go to Rennes so also a good date, since we know the club and the state of mind of Mr (Vincent) Sapène who is super nice. And then we will do here (at the Pyramids) the final of the Masters on September 17 and 18. At Cupra level Padel-Point Tour I also want to emphasize the quality of our partners: Cupra, Padel-Point, Wilson, Granny and Mariole “soft petanque”. Without them all these beautiful events and the quality that we bring, we could not do it. It is very important to point this out. In 2023 we will continue, we will ensure that it grows.

The club is moving, people feel it. In terms of facilities, we will soon have four additional, fully covered tracks. This is going to do something really cool.

Besides that, we will continue to improve the tennis copy. We are going to redo the pitches, even those that are covered. So we are really evolving.”

Padel Magazine : On the part of the slopes of padel, there will therefore be four lands of padel indoor. It's for when ?

Franck : We would like to start as soon as possible very honestly. We are working on “who”? Who will carry out this beautiful project for us? To bring both aesthetics, but also to meet the needs of the players, because we want later to make beautiful events. So perhaps moving towards international events, we need tracks with an international dimension: at least two. And then two more that would be more playable all year round. We work, but now with whom?”

The interview can be found on video, right here: