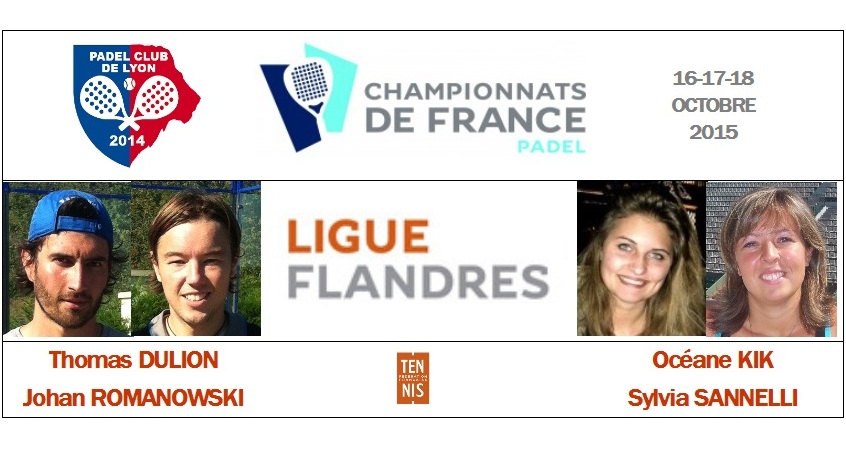 Jérôme Bécasset and Jean-Marc Herard will carry out a daily zoom on a league and its representatives for the French padel championships in Padel Lyon Club (Padel Central). The league of Flanders is sifting through.

Oceane KIK (OK): I started tennis at the age of 6 years. Champion of Flanders several times, I participated several times in the championships of France and integrated the sport-studies section at the league of Flanders. Tennis marked my childhood. Unfortunately, a health concern has stopped my progression. Today, tennis remains a passion. My best ranking was 5 / 6.

Sylvia SANNELLI (SN): I play tennis since the age of 5 years. Depending on my professional constraints, I try to participate in some tournaments.

I touch a little all racket sports (squash, badminton, table tennis) and in recent years I discovered and practice with great pleasure the "new emerging sports" such as beach tennis and paddle, which provide a framework more playful and friendly than tennis.

OK: I had already heard about the padel a few years ago but I really took an interest in this sport when I participated in a tournament at the end of June at the Lesquin club. And I love, I'm a fan.

SN: I discovered the padel during different stays of interclub preparation in Spain in the Barcelona region in 2007 / 2008 / 2009. In the end, everyone has abandoned tennis rackets to indulge padel ... true addicts!

OK: I play very little padel because the land is far enough from my home. I love this sport, I have more fun on a padel court than on a tennis court. I intend to participate in all the upcoming tournaments organized in the region!

SN: I practice padel occasionally but with a lot of fun. The existing infrastructure in the north does not allow me to play several times a week (the nearest club is more than 40 km from home). We look forward to padel courts near Valenciennes to enjoy the maximum.

OK and SN: We play Padel Attitude to Lesquin and we are licensed at Tennis Squash Badminton Valenciennes,

OK: It's Sylvia, who made me discover the padel. We used to play tennis together so we tried a paddle tournament together, and it worked well.

SN: We played several times in doubles with Océane these 2 last years at tennis interclubs. The current goes well and she is very dynamic and nimble on the fly. I offered him to discover the padel, she immediately hooked.

OK: The regional qualifying stages were held in a good atmosphere. Unfortunately, there were very few women's teams, but it was a great experience, and I can not wait to see the French championships.

SN: We played qualifying at Padel Lesquin's attitude. Only 3 women's teams registered, but it's a good start for a first edition! I am sure that next year we will be at least 8 teams, the padel being in full expansion in our region.

OK: Be the first lady team to be French padel champion, and mark the history of French sport.

SN: The idea is to gain maturity and experience during this first edition of the championship of France. Having qualified is already a performance of choice! The pleasure of the game will be our first motivation. I would be satisfied if we reached the final 1 / 4.

OK and SN: We do not know the other qualified teams,

OK: Be careful girls, the ch'ti are coming to the Padel !

SN: Let's have fun and have a good time together, with good humor and fair play.

OK and SN: We are a young team, but we will give everything in the field :))

Johan Romanowski (JR): I started tennis when I was 7ans, I got my best ranking at the age of 24 years (-4 / 6). Several times regional champion, I participated in many national and international tournaments in the youth category. I played 16 seasons in National (from N4 to N1B)

JR: I discovered padel in 2005 with my friend Nicolas Sene (ex first squash and badminton series). We came from different snowshoe sports and the padel brought us together.

TD: I discovered the padel in Spain during a preparation for an interclub competition with the first team of Valenciennes. We played so much that we did not play a lot of tennis anymore ...

JR: Apart from a few tournaments played between 2005 and 2007, we can say that my experience began in September 2014 with the opening of Padel Attitude (Lille-Lesquin). Since then, I practice regularly in the company of some friends,

TD: We started with Johan a year ago when we opened Padel Attitude.

JR and TD: We play Padel Attitude of Lille-Lesquin represented by Mrs Duhamel and Nollet and have been licensed at Tennis Squash Badminton in Valenciennes for 10 years. A padel development project is also underway there.

JR: We have been playing since September 2014. Our common philosophy makes us a complementary team.

TD: We have been working together for 8 years. We know each other very well, which allows us to be complementary in the field

JR: the tournament was held in a very good spirit despite the stakes and the heat of the north!

TD: Everything went well, we did not lose a set of the day!

JR: we have no idea of ​​the top French level, the experience will be necessarily rewarding. Avoiding the last place would make us happy. We have recently seen the team composed of Franck Binisti and Justin Garnier who looks solid. We had the chance to be advised by Robin Haziza, thank you to him, but he plays in another category than ours.

TD: we have the ambition to discover what the level represents in the other regions.

JR and TD: our favorites are Robin Haziza and Jérémy Scaténa

JR: In the north we also play Padel !!

TD: We play padel and we appreciate the 3st half time!

For this first year, we organized a regional championship last June on the facilities of Padel Attitude. In total, 20 men's clubs and 3 women's teams took part in the competition over one day. We had very good feedback on this day of the championship. Even if there were very big differences in scores, many players had signed up having played only once before the championship. For 2016, we hope to welcome more female teams.

There are about ten clubs that have contacted us to know the possibilities of making a field on abandoned outdoor grounds or used space. For 2016, 10 terrains should see the day. The interested clubs are visited to be accompanied on the writing of a grant file. As we strongly believe in this new discipline, the league has decided to pay a fee of 5000 € per short (For clubs with less than 200 licensed) and 10000 € for 2 short (more than 200 licensed).

A reference Padel has been appointed, you can contact Judith Merchie (06 83 39 16 98 or judith.merchie@fft.fr) for more information.