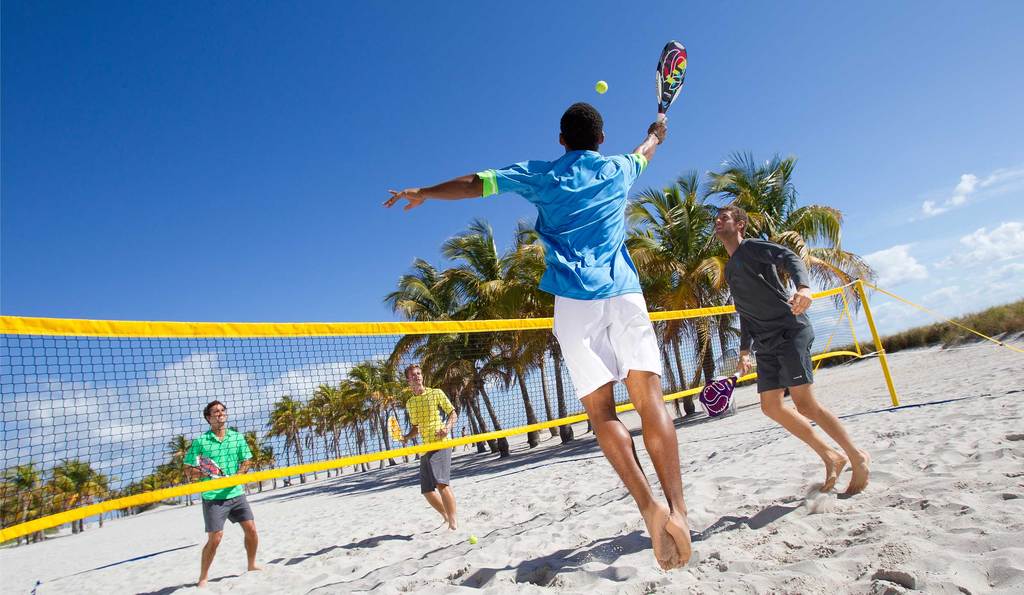 Just like the padel, beach tennis is one of those racket sports that are emerging and growing in popularity around the world. He greatly resembles his colleague tennis but also has some similarities with the padel. We will see how the skills of beach tennis can be used greatly to become a future tennis player. padel.

FFT enlightens us a little more about the technical moves of this sport:

The service : It is carried out a little in the same way as in tennis except that the players have only from a single service for the face-off. If the player makes the fault, that will be the point for the opponents.

Return of service : Attitude of attention goes hand in hand with maximum concentration. The main mistake we tend to make when starting out is to position ourselves too far from the net.

Forehand / backhand volley : The technique remains relatively the same as in tennis, however, there will be a little less preparation for playing the shots due to the speed of the ball and the close combat on the fly.

Amortization : It is carried out a bit like badminton, the racket is rather placed at the top of the net to come and drop the ball just behind the net. The ball is therefore caught quite early. There is also a variation with the cushioned smash which consists in making a fake smash to finally drop the ball gently.

There is a good tennis base in this sport. The tennis players will therefore have a great advantage to start there. Beach tennis still has some specific moves that allow it to have its own culture:

The dives: They can be sideways / back / forward, to get a ball in defense.

The rolled arm: This gesture allows you to hit the ball behind you with a circular gesture while jumping. You could think of it as a little ticking smash.

Rainbow shot: This is the shot that surely requires the most technique. To put it simply, this is a backhand made with the forehand face.

The similarities between beach tennis and padel

Land size: They are not quite the same but almost, the size of a beach tennis court is 8 meters wide by 16 meters long, the padel meanwhile is played over 10 meters wide and 20 meters long. Beach tennis players will have a spatial cue when they start the game. padel since the measurements of the court are relatively the same.

The fly : It is the main element of this sport since there is no rebound. The players will therefore have to serve as in tennis then glue the net following to achieve a certain number of ends. Technically it strongly resembles the fly of the padel, on the other hand, because of the height of the net, the players will tend to place their elbows a little more above, at the level of the head. It is a sport that is played very quickly with many reflexes so players often just put their racquet in opposition to block the ball.

The lob : To change the rhythm during the point, the players tend to make lobs which destabilize the volleyball players a little. We obviously do not find the lob after rebound as in padel but just a blocked volley whose trajectory starts in height. It is more of a finesse shot with touching the ball rather than a technical shot with a preparation phase. It looks a bit like the lobed volley of the padel.

Reflexes: If there were two parameters to remember in beach tennis, it is obviously volleys and reflexes. Indeed, the players sticking the net receive a tennis service when they are only at a distance of 8 meters from the server. Reflex is therefore one of the most important skills to have when practicing this sport. To give an example of comparison on the reflexes between these two sports, we can imagine a player of padel making a bajada as the opponents stick the net to intercept. The reflexes will therefore be put to the test to counter the ball. In addition to reflexes, beach tennis is undoubtedly an even more explosive sport (in terms of the duration of the match) since the exchanges are faster between the opponents. It will therefore be necessary to use reflexes and explosiveness to win the points!

We find a set of similarities between these two sports with a large base of volleys. Beach tennis players will no doubt have no difficulty in being able to adapt to the playing conditions of the padel. However, there remains one parameter that could be destabilizing, which is the rebound. If they do not have a basic tennis, it will take a little time for them to master the shots after rebound, and especially the balls that hit the windows.

2 comments on “Padel and beach tennis, the similarities"