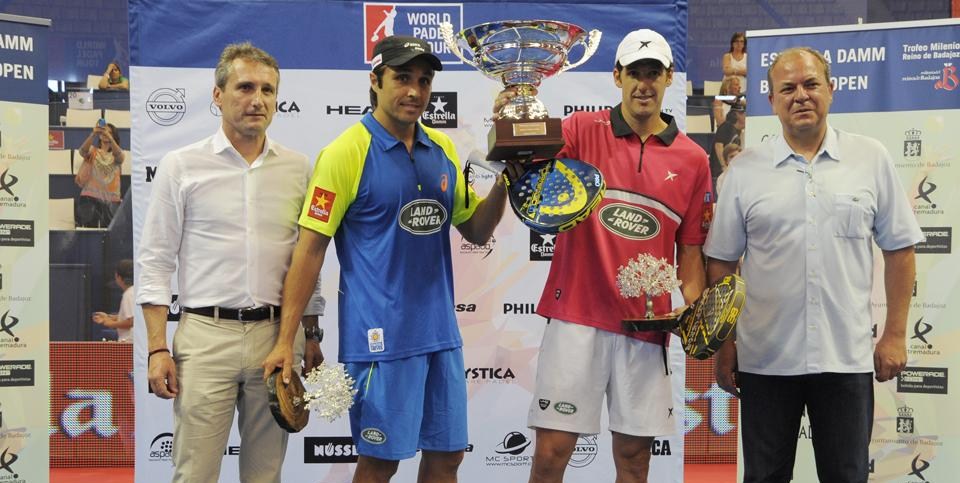 Padel Magazine - Juan Martin Diaz and Fernando Belasteguin did not do in the lace in Badajoz a few kilometers from the Portuguese border, to win against their eternal rivals Juani Mieres and Pablo Lima in this magnificent sports complex: "La Granadilla" .

The final: A demonstration of the King

The score shows the difference in levels between the real world numbers and the others. Let's remember ... Currently and officially, the world numbers are Lima and Mieres and not the Kings and it's not a joke! But with this victory, Bela and Juan are certain to find their place of No. 1 WPT Wednesday.

Faced with future world number two, Kings lost only 9 games in 3 sets. What a feat!

Because the way was there! If in the first set, the "princes" who are sorry to stay always and again, yet put the pressure on Juan and Bela ... it stops there. The first set lost 6 / 4 was just the beginning of a demonstration of our ex and future world numbers that we thought was on the decline with their various health problems. This is clearly old story and the competition has received the 5 message on 5.

The next two sets will be a slow agony for Mieres and Lima: 6 / 3 6 / 2 and therefore two consecutive victories in as many tournaments for the Hispano-Argentine pair.

The audience obviously wanted more, to have a match with a real fight ... He even encouraged Lima-Mieres, but the public ended up being charmed by the quality of play Diaz-Belasteguin.

What are the other pairs doing?

Far from the 1ages world pair.

Yet at the Masters of Madrid, it was believed the rise of competition.

Sanyo and Maxi Sánchez Gutiérrez? Observers think they have huge potential. They won the Masters against Bela and Juan. Yes, but ... They were hurt. At 80%, they could have won the masters. The height that still shows the important difference between the numbers ones and 4e world. Sanyo and Maxi are young and very talented. But that's not enough. And they have yet to overcome to make regular finals and win titles.

Cristian Gutierrez and Matthias Diaz? It's a pair that we thought was lost in advance. Two defenders in one team ... And it works! That it is difficult to win a match against them. They make very few mistakes and manage to break the opposing game. Against Bela and Juan, in the semifinals of the Badajoz International Open, they lost in 3 sets and with honors. However, it is not enough, it lacks a real attacker. If Matthias plays this role at times, it is not enough today to claim the top 2 world.

Juan and Bela have shown a face that renders sterile any hint. The story is running, because seeing a pair as untouchable whatever the sport is rare enough to report it.

The next WPT will be held in Cordoba ... next step.