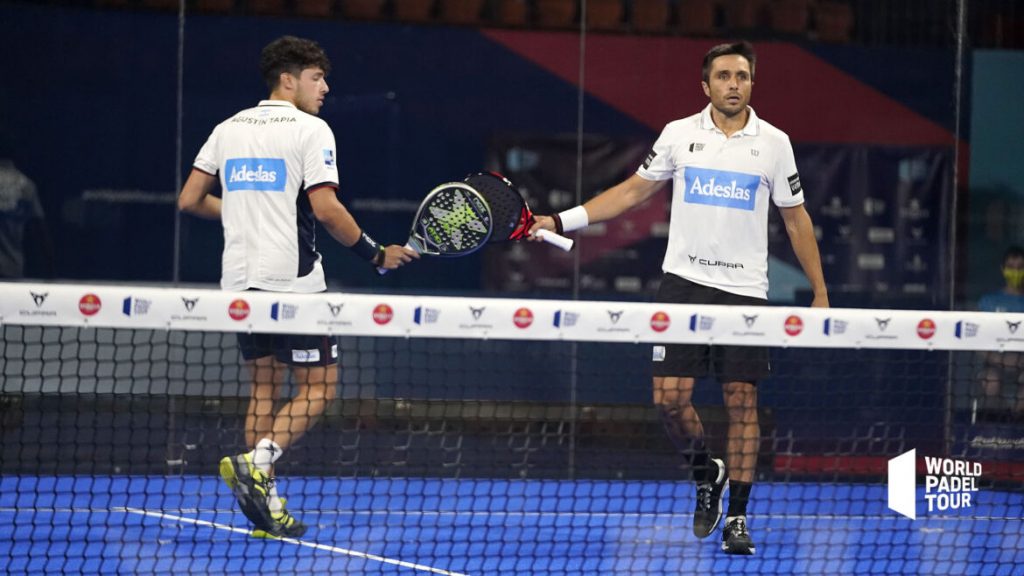 For the first time in 2020, we will have a final on the World Padel Tour with only Argentines : Franco Stupaczuk, Sanyo Gutierrez, Agustin Tapia, and Fernando Belasteguin.

A first for Stupa / Sanyo

This morning, Franco Stupaczuk and Sanyo Gutierrez, who disputed their 5th semi-final of 2020, have finally succeeded in taking this step. It must be said that for once, the Argentines had not inherited the Galan / Lebron scarecrow, who have eliminated four times at this stage of the competition this season!

More comfortable with the slightly slower pace of Navarro / Lima, Sanyo and Stupa achieved a very solid match and took advantage of the lack of rhythm of the Spanish-Brazilian pair. Thanks to their victory 6 / 3 7 / 5, we will meet them tomorrow for their first final together !

Undefeated indoors since the resumption, Ale Galan and Juan Lebron started favorites in this confrontation against Sardegna Open winners. It must be said that the Spaniards impressed yesterday in the semifinals.

In a first set yet balanced, Ale and Juan mastered the important points better, winning the three games played at “punto de oro”, to win the first round 6/2 in 41 minutes. We still said to ourselves that Bela / Tapia, who had had 7 break points without converting a single one, had missed too many opportunities, but perhaps still had a card to play.

Starting again in the fight in the second set, the Argentine pair managed, from the third game, to take their first break of the game. Taking advantage of unusual mistakes made by young Spaniards, especially in the spike, and tearing off all the balls, Tapia and Bela finally managed to win the set, 6/4, to “punto de oro”, as a symbol.

While we would not have given much of the Argentines' skin if Galan and Lebron had managed to break free at 5/4, the match ended at the start of the third. With a phenomenal Agustin on the spike, and better management of important moments, Belasteguin and Tapia win 2/6 6/4 6/2, on a final decisive point (there were 7 in total in the match).

They offer themselves a second consecutive final, facing Stupa / Sanyo that they have not yet beaten this season in two confrontations ... But Tapia / Belasteguin are in great shape, and the two times these teams faced each other, Bela played on the right ...

Appointment tomorrow at 10:00 am for a final that promises to be explosive!