FFT has realised a survey on padel to study his awareness level, padel practice et frequency.

Conclusion: very promising figures despite a few points to work on. Padel continues to develop.

This is a very satisfactory figure. The Opinion Way study is clear: in February 2020, nearly a fifth of the population would know the padel. One more proof that padel is a sport which is taking up space in the public space.

The work of the FFT via in particular its policy of networking padel throughout the territory, the echo of the media more and more present on the theme of padel, the personalities who seize the padel allow this sport to have a very important development in France as in Europe.

The poll specifies its figure of 19%:

Surprisingly, the 65 and over do not know this sport while padel is considered a sport for all. Moreover in Spain, a good part of the population who plays padel is over 65 years old.

Unsurprisingly, respondents from the southwest seem more qualified in the padel with a rate that exceeds a quarter. More than 1/4 of the people of the South West know padel. It must be said that Occitanie and Nouvelle-Aquitaine in particular have worn padel over the past 20 years.

Not to mention the major events that have taken place since the 2000s with the world padel in 2000, the French padel Open Place du Capitole, and more recently, the French padel championships ... and the padel structures which are found everywhere in the south of France.

Less than one in four connoisseurs have already practiced this sport, mainly 4-25 year olds, CSP A, with at least one child. 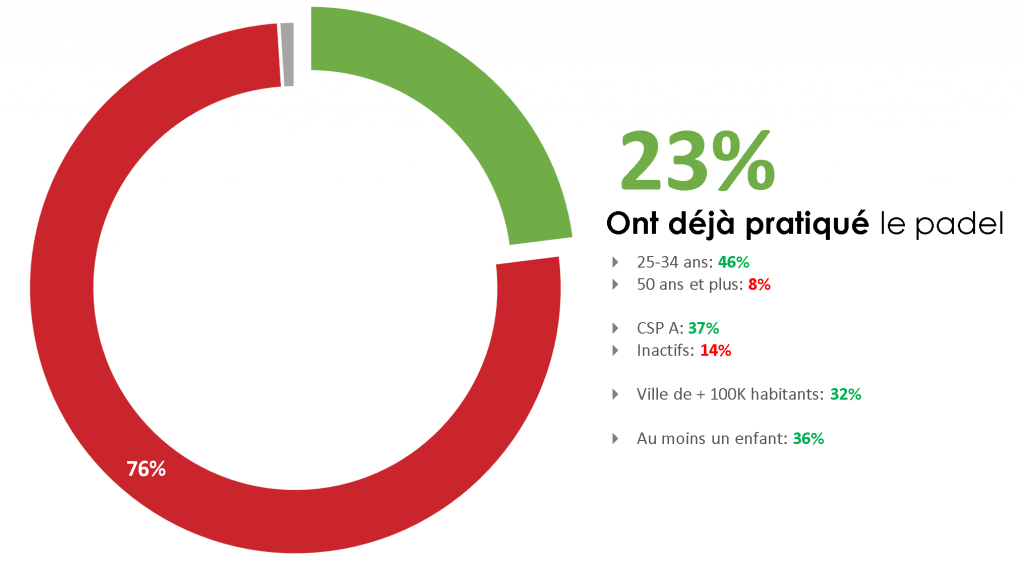 Here are the details :

Presque 50% of 25-34 year olds who know padel have already played. This is the number to keep in this statistic. Even if we would obviously have liked the 50+ to test themselves in padel more often.

19% of those who practice padel play at least once a week, and 17% play several times a month. So we have plus 1/3 of the players who are regular players.

55% of the 23% who practice padel have played padel at least once in the last 12 months.

Padel is an addictive sport. However, we observe that many who have played padel do not always come back. It's hard to know why this delta is so important. Please feel free to comment on this post and allow us to have your opinion.

OpinionWay commissioned by the FFT, therefore carried out a quantitative study carried out on a sample of 1008 French people aged 18 and over in February 2020.


This sample is representative of French people aged 18 and over thanks to the establishment of quotas at the level of sex, age, CSP, region and agglomeration.