In his interview with the newspaper "AS", Fernando Belasteguin talks about his victory at the Madrid Masters and his season.

16 year number 1, it's not nothing. And this season had started well for him and his partner Pablo Lima. Unfortunately an elbow injury this summer put her on the sidelines.

Thanks to the accumulated points, the Argentine-Brazilian pair was invited to Madrid where we know the final scenario: a victory full of laughter and tears. 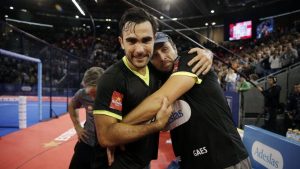 I came to Madrid to test myself, to see how I felt, and to know if I was ready for the competition. I am very competitive by nature, in all that is offered to me, such as bet to whoever will throw the most boxes in the trash container. I do everything with the same commitment, I knew that I had recovered from my injury and wanted to know if I was at

More than 4 months of hard work and recovery were needed to heal this elbow tendon tear. In the standings, Bela has been dethroned, but he promises "To prepare to fight and become 1 number again next season".

Finally, the issue of retirement did not make him hot or cold. After resigning two more years with his sponsor, King Bela believes he can play a few more years at the best level, and that when the time comes he "Will create his own club and devote himself entirely to it".

Fernando Belasteguin is not ready to abandon us and it is for our greatest pleasure.