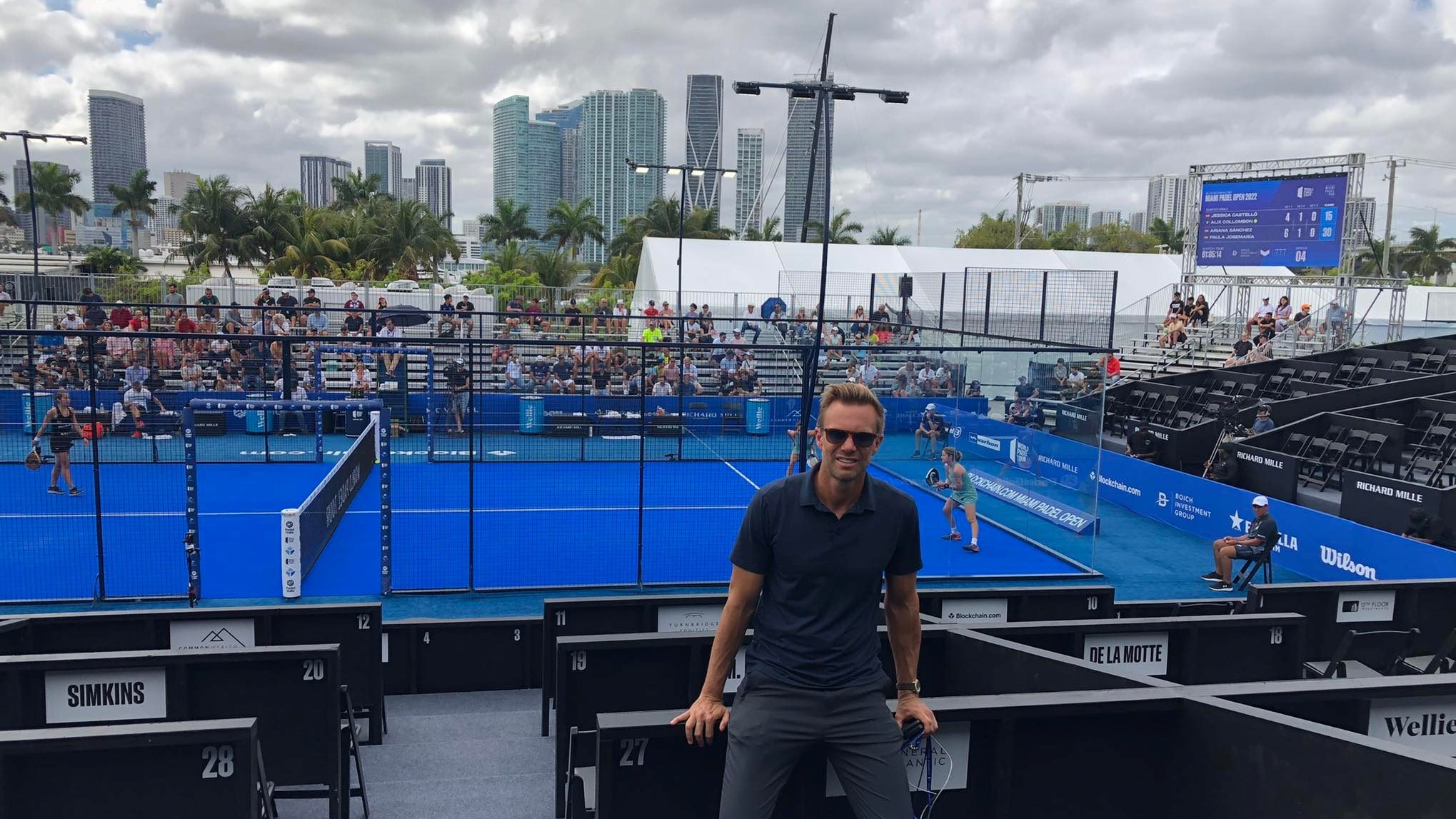 Nallé Grinda experienced the very beginning of padel in Mexico. Since then, he has made his way through the padel until becoming Miami's WPT Blockchain.com Director.

Witness to the birth of padel

Nallé Grinda: “I got into padel in 1980, when I was only four years old. Through his best friend, Tony Murray, mwe father knew Enrique Corcuera , the inventor of padel. Tony had a house near Enrique's in Las Brisas, Acapulco. We've been there four or five years in a row. There were five or six houses in the neighborhood where each owner had built his own land of padel. All of them were tennis players and loved to play padel whole. They used to have parties at each other's houses. And each house liked to create its own rules, depending on certain constraints, opinions or whims."

“All the courts in Acapulco had different sizes and configurations. The length of the court could vary between 18 and 20 meters. Some used the walls of the house. Each court had its particularities. The standard court is now fixed (20m x 10m). But back then, everything was flexible, including the hardware used."

Nallé Grinda: "I remember how they had the ironic idea of ​​playing the 'World Championships of padel”. They were 16. They were in fact the only “serious” players in the world, as they liked to say."

"But, on the whole, throughout my youth, the padel was just a fun game. My uncle had a house in Saint-Tropez where we were able to play a lot of padel also. But, it was just a game for me, my first real passion was tennis."

The real beginnings in the padel

Nallé Grinda: "I did sport-studies in France and, from the age of 17 to 21, I played tennis professionally, taking part in tournaments in Europe, the United States and a few in South America. But, due to a series of injuries and operations, I decided to go play for UCLA, where I received a full scholarship. At the age of 24, I graduated and it was then that I rediscovered the padel in a new light."

"Returning to Nice, where my family is from, I found in the newspaper an article of a quarter-page advertisement to come and discover an exhibition match with Gaby Reca, Juan Martin Diaz, Hernan Auguste and Fernando Belastaguin. It was in 2002. The organizers of the match, Gilbert Dalbergue and Claude Baigts, president of the French federation of padel at the time, were so passionate about padel that they did everything possible to make this event a success."

Nallé Grinda: "During this tournament, I met Claude Baigts and, having seen my qualities as a tennis player, he pushed me to play padel for the French national team. So, in 2002, I took part in the world championships for France in Mexico. In the first round, playing with Sebastien Corbelli, another freshly converted tennis player, we won our first match easily. In the second round, however, we encountered Argentines, who were seeded 12. We won our first game quietly and then found out what the real one was. padel, since we lost 6/1 6/0. It was a whole new level for us."

"At the time, I had a fleeting career in television. I was on the Fear Factor show in Patagonia, Argentina, and extended my stay for intensive training at “El Monasterio” in Buenos Aires, with famed coach Nito Brea and some of the best players in the world. I learned the real basics of the game, from the position on the ground to the rotation in the corners, including the chiquita and all the aerial options. From there, I never looked back. I played for the French national team for the next ten years."

His journey to organizing the WPT Miami

Nallé Grinda: "Fast forward to 2014, I had moved to Miami. having met Wayne boich thanks to my connections in tennis, I managed to convince him to try the padel when we were on vacation in Nice. When we got back to Miami, I showed Wayne the only court in padel city ​​location. And very quickly, he fell in love. So much so that he transformed the tennis court of his house in South Beach into a luxurious padel."

“Once the building was built, Wayne and I became the most visible faces of the padel at Miami. We brought in some of the best professional players, including Juan Martin Diaz who was still the world number 1, to play pro-am matches. The following year, in 2015, we welcomed the eight best players in the world, accompanied by their sponsors. Thanks to the dynamics of padel which is growing every year and building a good team (Wayne Boich, Dani Homedes and myself) we were able to bid and win hosting the WPT this year in Miami."

"Given the success of the Miami event, we are confident to organize other events in the future. Of course, Miami will be a key hub, but we hope to have other events around the United States as well in 2023.”

This interview was conducted by Minter Dial during the WPT in Miami in March 2022.