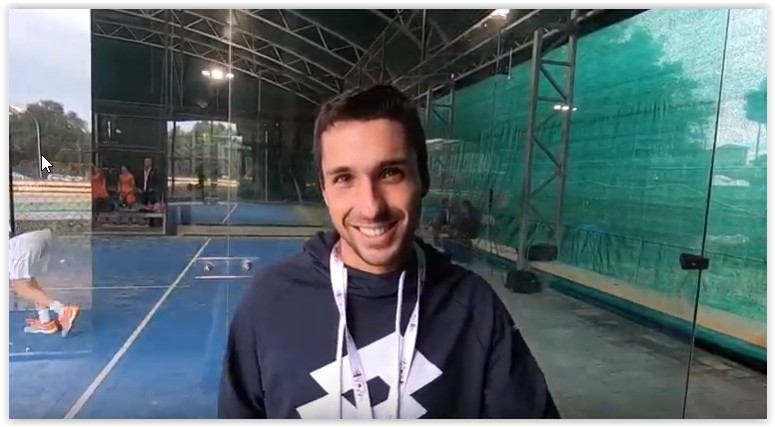 Meeting with Andres Britos. This Argentinian Italian player was certainly one of the most enjoyable players of these 2019 padel European Championships. Always smiling, joker, he is open to discussions and always ready to help the padel development. Meet with this player who, on the ground, will have done a lot of trouble to the team of France.

Andres Britos, Italian-Argentinian player who will celebrate his 30 next year, points to the 74 rank of the WPT ranking. We had the chance to share the microphone during the men's final of the Open tournament with this "magician" of the padel. During the 2 match of the Italy-France final, he will be the boss on the field, realizing very few direct mistakes. Here is Andres Britos at the microphone of Padel Magazine.

Padel Magazine : Tell us about your week here in Rome, your team tournament and your Open tournament?

AB: First of all thank you PM for this interview and for relaying the matches of this tournament, to allow people who are not present to follow what is going on here. Then, great to be here in Rome, play with the Italian team and happy to be able to play the Open tournament even if we lost in the semi-finals, second European championship where we lose in the semi-finals. I hope that in 2 years, for the next European Championships, we will reach the final.

The team is fine, we are very united. I think we should reach the final against France, a difficult team, where I think we will see good show, quality. Both they and us have quality players. We only want to win this title and leave it here at home, that's our goal.

PM: You speak of a final Italy-France but it could be also Italy-Great Britain?

AB: Yes, we must not forget or belittle the high level of play in the United Kingdom, but as a favorite game, it would be Italy-France in the final.

Thanks to Andres Britos and his smile, which will have fired on the central field giving the point of victory to Italy in a crazy game against Jérémy Scatena and Johan Bergeron.