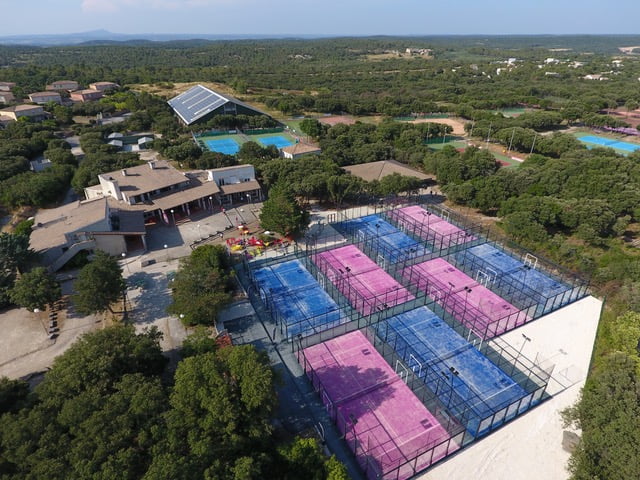 In France, the FFT policy led by the former team, Hubert Picquier and Bernard Giudicelli, allowed theemergence of numerous padel. But for a very large majority of these new clubs, it is a field of padel or 2 at best.

This policy has been beneficial in some cases, but we realize that it can also be against-productive and that she is atorigin of a growing underlying tension in the padel.

In March 2021, for example, the FFT recorded 365 clubs padel affiliated and authorized for 838 sites. Is an average of 2,3 pitches per club.

Even though we haven't been able to compare this figure with Spain, Italy or Sweden, the ratio seems low, probably well below what can be found in countries fond of superstructures!

A figure which is in line with the former FFT policy of setting up a padel everywhere in France as part of its territorial network. But this policy may have its limits and we can see it today.

The FFT offers us another very interesting figure, still in 2021, out of 365 clubs which have at least one pitch, 240 clubs have 2 pitches of padel or more. Which means we have 125 clubs with a single pitch, i.e. 34% of our offers in the territory. Is it a good thing for the padel and its development? That's the question.

A disappointing figure that must absolutely be seen to drop. And the FFT seems to have understood this. She might want to break this dynamic to put a lot of padel here or there by helping to create poles padel more important. In any case, that's what we think we understand.

For 2024, Gilles Moretton's team has set itself as objective of having 600 clubs padel in France for 1.500 pitches including 500 clubs with at least 2 pitches of padel.

Which simply means that the FFT hopes to obtain an average of 2.5 pitches per club… Either a difference of 0.2 lots compared to today in 4 years.

A ratio that still seems very low. And a result in contradiction with the ambitions of the FFT: to develop major offers padel, large centers, schools of padel, capture new audiences, get closer to clubs padel private, etc.

The FFT wants to reduce the number of clubs to 1 field while increasing the capacity in fields of padel clubs. A very good thing, that is why the ratio of 2.5 pitches per club to reach only 1500 pitches of padel seems very weak to us.

Indeed, in 2021, the bar of 1000 courts of padel is unofficially already achieved, and the development of padel is supposed to be exponential. But we are already naturally on a rate of 150/200 new fields of padel annually and this even during the health crisis.

How can you imagine staying on a linear curve until the 2024 Olympic Games to reach 1500 pitches?

If we start with 600 clubs in 2024 for an average of 4 pitches of padel, we would be at 2400 lots. In the interest of our sport, we believe that we should aim for this figure which seems achievable to us and avoid having fields of padel isolated.

This is why, for us, a policy of the number of padel per club should be integrated into the goals of the FFT.

The FFT policy allowed affiliated tennis clubs to have financial aid for the first 2 courts of padel. Without counting the town halls which could also help and supplement the aid. A policy which fell within the framework of the territorial network of the FFT. But the perverse effect of this policy is the development of clubs padel with 1 to 2 fields of padel to the point where we find ourselves today with 34% of clubs with a first padel. We imagine that we exceed half of the offers if we integrate the clubs with 2 pitches.

This is why we are proposing a new financial assistance strategy:

1- First of all that this help is obviously for all affiliated and authorized clubs (or in the process of being). As Gilles Moretton has said on several occasions, he wishes to be the President of all the clubs of padel. And we know how the clubs of padel private individuals have until then felt abandoned by their Federation.

2- Finally, that financial aid comes from the 3rd field of padel. It would be a strong message to the whole community padel.

3- Another option would be a progressive and increasing aid according to the number of land built with the adage: “The more you invest, the more we help you”.

The direct consequence: the subsidies for the first two sites of padel would be reduced or abandoned.

Agree / disagree, we are waiting for your reactions (and your ideas too)!